Harry Potter and the Goblet of Queer Erasure | The Mary Sue

Harry Potter and the Goblet of Queer Erasure 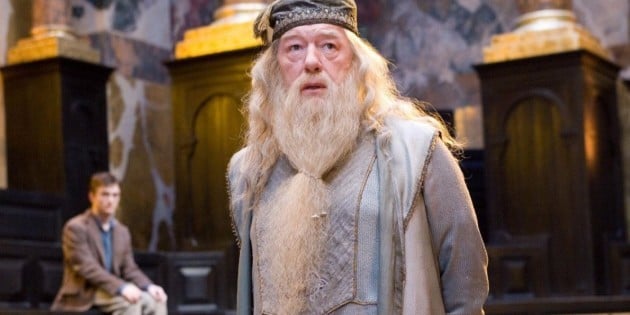 Last Wednesday, the internet reacted to a new crucio curse courtesy of Director David Yates, who revealed to Entertainment Weekly how the upcoming sequel Fantastic Beasts: The Crimes of Gindelwald will handle the sexuality of young Albus Dumbledore (Jude Law). The reveal? It won’t. At least “not explicitly,” according to Yates. No mention at all was made of Grindelwald’s sexuality, who, as the other half of a romantic pairing with Dumbledore, we could have also have assumed to be queer.

This site had already discussed why this is, well, awful, as well as how Rowling’s dismissive response to the controversy soured things further. After keeping Johnny Depp on in the role of Grindelwald despite Amber Heard coming forward about the abuse in their relationship, and J.K. Rowling’s subsequent dismissal of fans’ concern over that choice, the one sliver of interest that many, myself included, had left in this franchise was to see Dumbledore’s sexuality depicted with respect as part of the story. We only know this about Dumbledore and Grindelwald because Rowling revealed her personal belief about Dumbledore outside the pages of the series, after the release of the seventh Harry Potter book. It was both a delight to fans, and a disappointment that we never saw this addressed specifically in the books. But there was hope for the film. As it turns out, Rowling and Yates have no interest in explicitly showing … anything. This isn’t just insulting to queer fans; it’s bad storytelling and part of a pernicious trend that itself has place in the long history of queer erasure in media.

For many years, mainstream films and television got away with showing, but not explicitly telling—that is, depicting in a way that cannot be denied—that a character is gay through subtext. Sometimes intentional, sometimes not, viewers still treasured many of those instances because any hint of queer representation was a drop of water in a boundless dessert. As queer visibility has increased and gay rights have advanced, television has moved far forward in LGBTQIA representation, directors of big budget films, and even authors like Rowling, have attempted to have it both ways when it comes to queer rep. Bill Condon made a stir when he touted that Beauty and the Beast would have an “exclusively Gay moment” which turned out to be just that, a moment, of LeFou dancing with another man. After that, Power Rangers asked for kudos for a moment implying the yellow Ranger might be bisexual or gay, but that’s all it was: a hint, nothing more.

Despite massive strides in some areas of representation in films like Wonder Woman and Black Panther, we’ve still never seen a gay superhero or supervillain on the big screen, even when the small screen is packed with them (from Arrow’s Mr. Terrific to Legends of Tomorrow’s White Canary to the Penguin on Gotham, DCTV especially is killing it for queer rep). Despite fan hopes, and even while giving us other representation in spades, Star Wars continues fail to give us any explicit LGBTQIA representation (even though we know Baze and Chirrut were married in Rogue One). While actors like human treasure Oscar Isaac happily admit to shipping queer pairings involving their character or say they would be open to the concept, it still doesn’t happen. We get excuses about studios not being able to market films in China or other conservative countries, but if it’s feasible to dub an entire film in another language, it’s also possible to adjust content for a foreign audience, so I don’t think that flies.

This long history of not just erasure, but complete absence of queer representation—because you can’t erase what was never there—in big films is why many queer people were hoping for better, or at least something from Fantastic Beasts 2: Electric Bowtruckle. It’s the story of Dumbledore pursuing Gindelwald, a man whose ideals he once shared and who, according to Rowling, he once loved, and may still love. Their romantic relationship is integral to understanding these characters—something we assumed couldn’t be erased, but apparently we were wrong.

To give some benefit of the doubt, the current stewards of the Potterverse on screen have not shown a great understanding of good storytelling in general lately. While the first Fantastic Beasts film had many lovely visual moments, it was a narrative mess in many ways, the most egregious of which was it couldn’t decide who, if anyone, was the main character. Though Newt Scamander was ostensibly the lead, the camera consistently treated him otherwise, and we as an audience were not experiencing a magical new world through his eyes, but from a detached and often disinterested point of view. Perhaps this is because the main character of this five-picture series is not Newt at all, but the absent Dumbledore to be introduced in 2 Fantastic 2 Grindelwald. In that case, it remains egregious that Yates, Rowling, and company think such a large aspect of his identity should be erased.

Yates says that more about Grindelwald and Dumbledore may be revealed along the way, but it’s still terrible storytelling to ignore the main connection and conflict between a film’s main character and the villain. How would Batman Returns play out if Bats and Catwoman were just pals who shared similar goals and different philosophy about getting to them? Or what if you made Thor without mentioning that he and Loki grew up as brothers? How characters feel about each other—platonic, fraternal, or romantic—matters to their story.

It’s disingenuous to say love stories have no place in an action or magical narrative since every movie, well, ever, has some romantic subplot somewhere in the mix. Even the Potterverse tortured us with the chemistry-less romantic antics of Ron and Hermione during the most important battle in the Wizarding World’s history. That actually made sense, because who they loved and how the related to them mattered to their stories, especially in a moment of crisis, but it shouldn’t even be a requirement. Heterosexual couples are allowed to exist, explicitly, in fiction for no reason at all, and queer couples deserve the same.

It’s not enough that some people will know that Dumbledore is gay because they researched it, just like some people know that Captain America is more than friends with Bucky. Sadly, audiences must be shown and told many times before they accept a character is queer. We’ve faced enough arguments over subtext to know this is true. Why does it always have to be about “friendship” or “ideals?” Why must same-sex relationships be whitewashed under the guise of “they’ve been in the trenches together”? Platonic love is great and important, but queer fans aren’t asking that platonic relationships be ignored, only that queer ones be allowed to exist.

I love the Potterverse. I love its vibrancy and potential for so many amazing stories. I want people like me to be part of it—to be part of all big stories. By saying that same-sex love should remain in the oft-debatable subtext of relationships, just nodding to it, saying it exists off-screen, that we’ll get it later, or that it’s there for those who see it or are in the know, is not just insulting, it’s harmful. It tells queer people that our stories and feelings don’t matter. It reinforces the idea that heterosexuality is the default, and a gay relationship is shameful. We have been begging and looking for representation, only finding it in subtext and fanfiction for so long, it’s time we were given it for real. At a time when those in power are questioning our very right to exist as queer people, when the film industry is slowly learning that #TimesUp and #BlackLivesMatter, we must also show them that we are simply here.