Fantastic Beasts to Make Dumbledore’s Sexuality Vague, Because the Books Didn’t Do That Enough Apparently 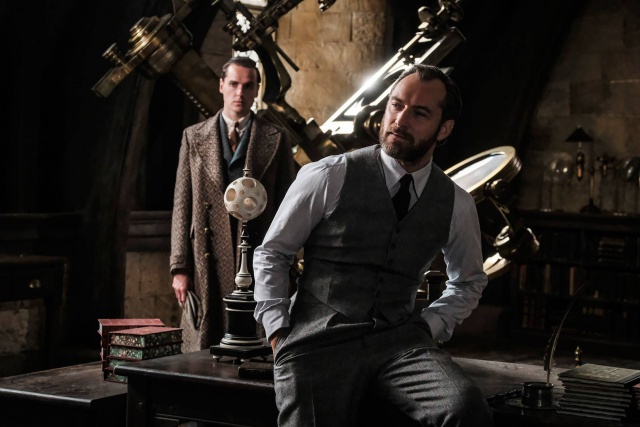 When the news first came out that Albus Dumbledore—teacher, legendary wizard, and father-figure to us all—was gay, my reaction was: Yeah, I could see it.

At 15 and fully into my RENT-is-the-best-musical-ever stage of existence, I was unphased that Dumbledore was gay. It didn’t change how I felt about the character, and I was old enough to “get” representation and happy that a character who was so beloved and treated with such reverence could also be gay.

It wasn’t until I was older and took a queer-theory course or two that I began to understand the messiness of Rowling’s revelation. Still, when I heard about young Dumbledore being a character in the upcoming Fantastic Beasts movie, which I won’t be giving my money for Depp-related reasons, I was excited about the hints from Rowling that Dumbledore would be openly gay.

David Yates, who has been showing his foolishness all over this press tour, said this on the topic of if Dumbledore’s sexuality being shown in the movie:

“Not explicitly,” Yates replied when asked if the film makes it clear that Dumbledore is gay. “But I think all the fans are aware of that. He had a very intense relationship with Grindelwald when they were young men. They fell in love with each other’s ideas, and ideology and each other.”

Excuse me while I scream into the abyss.

This means that as of 2018, throughout the original series and what will be two expanded universe movies, Dumbledore will have never been shown to be explicitly gay! N.E.V.E.R!

The problem with this is that, yes, Dumbledore being gay is canon because J.K. Rowling said so, but that’s the only reason why it exists. Nothing in the books explicitly talks about Dumbledore being homosexual. Yes, I know the argument is “well none of the teachers have relationships.”

Firstly, false. Snape, Lupin, and Hagrid were all teachers and all of them had love interests at some point in the series.

Secondly, this book series is filled to the brim with straight couples, and we only have one gay couple in all of Harry Potter: Dumbledore and Grindelwald. Not only is their relationship unhealthy, but in all discussion about their relationship, it’s always about “their ideas,” or “their ideology.” It’s never sexual, or spoken about with sexual passion. All of which this movie could have given us. I have no problem with Dumbledore being asexual and gay if that were the reason there is so much emphasis on their intellectual connection, but that is clearly not the reason.

Additionally, Grindelwald is proto-Voldemort and dies at the end of the original HP series while Dumbledore is killed off in the sixth book. So the total of all the queer representation in the series is: sexless, unhealthy, and dead. We have no hint that Dumbledore had relationships past Grindelwald, and Grindelwald was imprisoned until his death. This isn’t good representation.

Plus, we have never explored any issues of homosexuality in the HP universe. We don’t know if Dumbledore was “closeted” or if the wizarding world has LGBTQ stigmas the way muggles do. We see in Fantastic Beasts they aren’t racially segregated, but one does not imply the other. There are reasons to assume the wizarding world could be either enlightened or conservative on the issue. We just don’t know and the lack of representation is the problem.

Just looking at Fantastic Beasts along  those lines, we have the following relationships: Newt x Tina, Newt x Leta, Leta x Theseus and Queenie x Jacob. We don’t have time to have for Dumbledore to be openly gay for the first time ever, but we can have room for all of this heteronormativity?

This is why people make fun of the retroactive attempts to make Harry Potter more inclusive. While I love the books, they were super white and straight and Christian, which is fine—the fandom has been developing the mythology and universe for ages—but don’t sit here and tell us that they celebrate Hanukkah at Hogwarts when every year we see a million Christmas trees and candles, but not one menorah. J.K. Rowling named her sole East Asian character, Cho Chang.

Do not tell us that Dumbledore is gay and then when you, as the screenwriter for the film J.K. Rowling, have a chance to correct your mistake, decide that his sexuality won’t be portrayed explicitly.

The EW article says that his sexuality might be addressed in one of the other three films, but again…you have found time to fit in all of the straight couples, but we can’t get an on-screen acknowledgment that Dumbledore is gay? Why the hell should we have to wait that long? You “outed” Dumbledore in 2007. Stop. Stop making excuses as to why Dumbledore can’t get laid, get a kiss, or even a tender hand-hold. Anything.

Yes, we the fans know he’s gay, but we deserve to see it done right. Especially since we didn’t ask you to make Dumbledore gay in the first place. It was J.K. Rowling who dropped that mic all by herself. We all know that if she was really only giving us fanservice with gay characters it would have been Lupin x Sirius.