Harrison Ford Wants Han Solo To Die. There. We Said It. He’d Still Play Him In Star Wars VII Though. 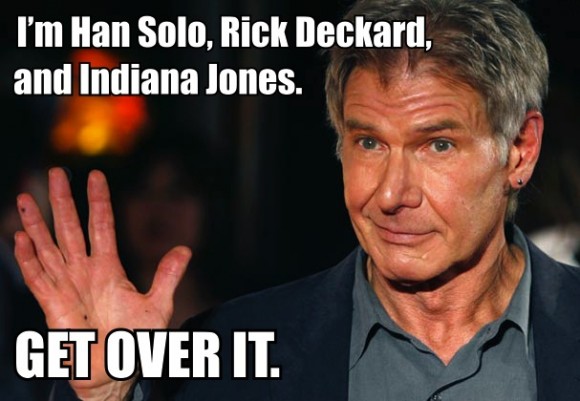 The next logical step in a huge Disney/LucasFilm purchase announcement is who will direct and who will star in Star Wars VII. Speculation is running wild since last week but a few tidbits are slowly leaking out. For instance, Harrison Ford is apparently up for returning to his iconic role even though he really wanted Han Solo to die. This is what we get for hiring a smuggler.

The news comes via Entertainment Weekly. According to a “highly-placed source” Ford is “open to the idea of doing the movie and he’s upbeat about it, all three of them are.” The source is including his Star Wars co-stars Mark Hamill and Carrie Fisher.

But Ford, who has admitted to not particularly liking Han as a character in the past, said this in a 2010 interview, “I thought he should have died in the last one to give it some bottom…George [Lucas] didn’t think there was any future in dead Han toys.” And in fact, that was the case, Han was meant to die in an earlier draft of Return of the Jedi. So would he insist on going out in a blaze of glory should he return?

Entertainment Weekly writes, “Indeed, Ford won’t go to the next level of contract talks until there’s a script and director in place. Either could be a deal breaker. Still, at any stage, an ‘upbeat; signal from Ford on any Solo matter is enough to shock and excite fans who view Star Wars as something close to religion.”

Meanwhile, Hamill said this of the older crew making a comeback. “I can see both sides of it, because in a way, there was a beginning, a middle, and an end and we all lived happily ever after and that’s the way it should be — and it’s great that people have fond memories, if they do have fond memories,” he said. “But on the other hand, there’s this ravenous desire on the part of the true believers to have more and more and more material.”

Would you like to see the trio return for the third trilogy or would you prefer new blood?

(via Entertainment Weekly, image via our charming “Get Over It” list)