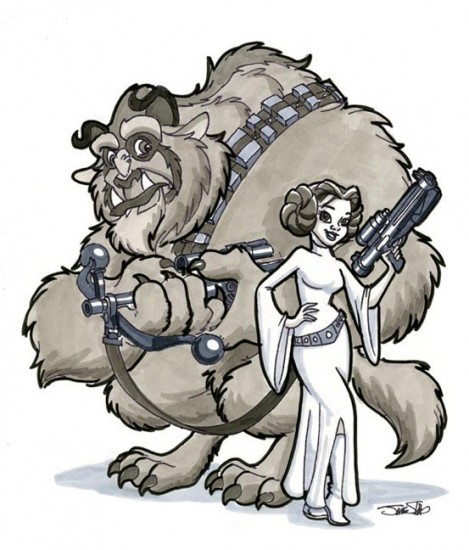 Look, I was expecting to be reeling from a hurricane this morning. I wasn’t expecting to hit the end of my work day with the news that Disney now controls all of its own properties, those of Marvel comics, and those of Lucasfilm. But it’s true. As confirmed by Reuters and several legitimate business sources, Disney has acquired Lucasfilm, and with Lucasfilm the Star Wars franchise. They’re also promising Star Wars Episode 7 by 2015, the same year as The Avengers 2 and Warner Bros. putative Justice League.

Here’s some of the incredible (and I mean that in the old sense, as seemingly the opposite of credible) quotes. From George Lucas:

For the past 35 years, one of my greatest pleasures has been to see Star Wars passed from one generation to the next… It’s now time for me to pass Star Wars on to a new generation of filmmakers. I’ve always believed that Star Wars could live beyond me, and I thought it was important to set up the transition during my lifetime. I’m confident that with Lucasfilm under the leadership of Kathleen Kennedy, and having a new home within the Disney organization, Star Wars will certainly live on and flourish for many generations to come. Disney’s reach and experience give Lucasfilm the opportunity to blaze new trails in film, television, interactive media, theme parks, live entertainment, and consumer products.

Ms. Kennedy will serve as executive producer on new Star Warsfeature films, with George Lucas serving as creative consultant. Star Wars Episode 7 is targeted for release in 2015, with more feature films expected to continue the Star Wars saga and grow the franchise well into the future.

And the natural caveat:

The Boards of Directors of Disney and Lucasfilm have approved the transaction, which is subject to clearance under the Hart-Scott-Rodino Antitrust Improvements Act, certain non-United States merger control regulations, and other customary closing conditions. The agreement has been approved by the sole shareholder of Lucasfilm.

Aside from simple franchise and intellectual property rights, this means that Disney has also acquired Industrial Light and Magic, original parent company of Pixar, which is a strange, strange circle of events indeed. For now, it’s too early to say what affect this will have on Disney or Lucasfilm, aside from the fact that money is undoubtedly changing hands. Disney Princess Leia, a Brad Bird directed Star Wars, and Episode VII, a trade negotiation between Jack Sparrow and the Dutch East India company are just a few of the ideas folks are throwing out on twitter.

You can read the entire press release right here.