X-Files, Handmaids Tale: How We Talk When We Talk About Rape | The Mary Sue

The X-Files and The Handmaid’s Tale: How We Talk When We Talk About Rape 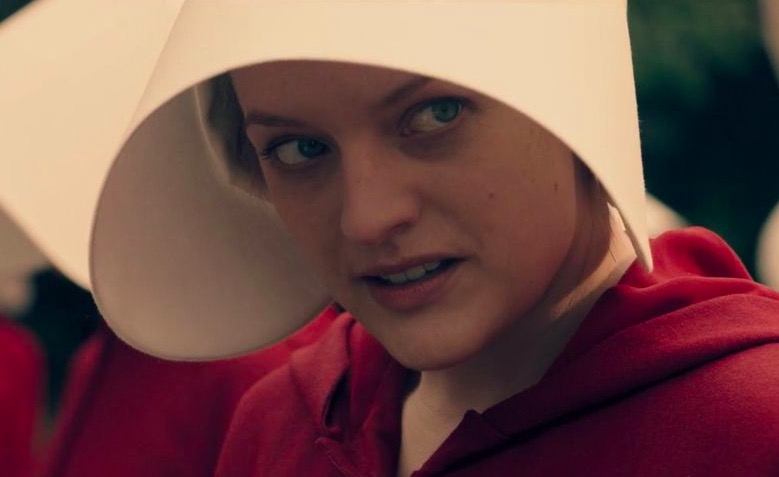 **Warning for discussion of sexual assault.**

It’s rare for a television scene to keep me up at night, or to stay with me beyond its brief flicker on the screen. Twice this past year, though, I’ve found myself haunted for days by scenes from two shows emblematic of their respective eras: The X Files, currently starting its eleventh season and attempting to return to its ’90s relevance, and freshly minted Golden Globe winner for Best Drama Series, The Handmaid’s Tale, which seems as tailored to the cultural moment as a show can possibly get.

Last spring, I was gripped by Offred’s (Elizabeth Moss) story, in particular the harrowing scene in the opening episode of The Handmaid’s Tale, when the camera lingers on her expressionless face as she is ritually raped by the Commander (Joseph Fiennes). Early this month, I was again viscerally repulsed by the nauseating final moments of the X-Files season 11 premiere, when series villain the cigarette smoking man (William B. Davis) reveals he, in fact, is the father of Scully’s (Gillian Anderson) child, the result of an assault committed against her years earlier.

In both these narratives, the violation of women’s bodies is sacralized by the argument that the children they are forced to carry are necessary for the salvation, in some sense, of the human race. In The Handmaid’s Tale, it’s due to a wave of infertility that threatens the survival of the population. In The X Files, it appears Scully’s child, William, will either save or doom humanity. In each story, those in power seek to justify their actions due to the severity of the situation at hand.

Despite these surface similarities, there are stark differences in the way each of these iconic shows speak about and depict what has been done to their central characters.

Whereas The Handmaid’s Tale is unflinching in its depiction of the emotional ramifications of rape, X-Files showrunner Chris Carter is already attempting to minimize the assault against Scully both in the way the show has glossed over that aspect of it and by couching what was done to her in the language of science.

Carter, no doubt recognizing the furor that would erupt over this plot point, had an answer ready for why this rectonned monstrosity of a reveal did not constitute a rape of his much-battered Scully character. In an interview Entertainment Weekly posted immediately after the airing of the season 11 opener, he defended what was done to her, saying, “He [Davis’ character] didn’t rape Scully. He impregnated her with science.”

When telling stories about rape and assault, the language we use can either obscure or draw attention to what is done to women’s bodies. Contrasted to this minimization of sexual assault in The X-Files, in the language surrounding rape in The Handmaid’s Tale—the religious intonations and overly formal cadences—we viewers recognize the controlling, authoritarian intent behind the formality.

Ritual phrases from The Handmaid’s Tale have already made their way into the cultural lexicon. “Blessed be the fruit,” and its prescribed response, “May the Lord Open,” are used by characters throughout The Handmaid’s Tale as a liturgy of rape. When viewers are first introduced to the social system surrounding procreation, it doesn’t immediately register that the “ceremony” Offred is preparing for is a codified assault. And even as the first scene of the ceremony proceeds, it is not immediately recognizable for what it really is.

We first see Offred’s face, square in the frame, unflinching and fixed. As her head moves in time to the Commander’s thrusts, we begin to internalize her experience, recognizing in her face the slight twitches of someone attempting to leave their body behind. When the camera reverses position to show us what she might be seeing, the details—her parted legs, the Commander’s rocking pelvis—are out-of-focus. Overtop the images on screen, we hear the crescendoing organ music of “Onward Christian Soldiers,” interspersed with the Old Testament passages that further cloak the violation in religious prose.

Because of the relative expressionlessness of Moss, the experience of this scene, and the many others like it in The Handmaid’s Tale, is that the viewer is given the chance to first contemplate their own reaction and emotions rather than immediately getting caught up in the character’s. Immediately following the rape, though, we’re given another shot of Offred’s face, this time with access to her inner monologue. We are then confronted with her rapid breathing and her attempts to quell her nausea. Despite all the formality of the filmmaking, The Handmaid’s Tale is relentlessly upfront about the bodily reality of the characters’ experiences, whether it’s the bleeding that comes with their periods, the agonies of breastfeeding, or the pain of childbirth. 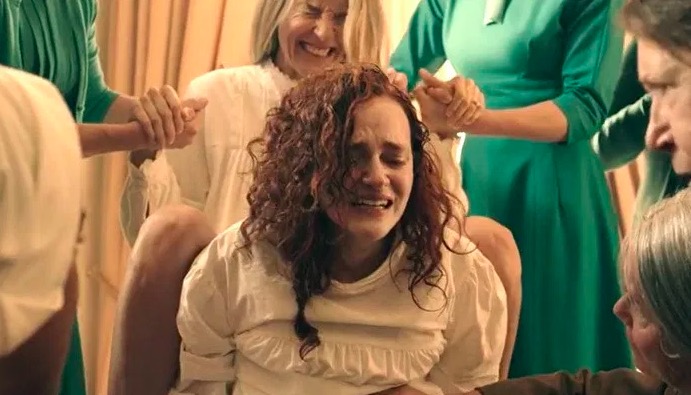 In contrast, The X-Files has long relied on a sterile scientific vocabulary in its many many depictions of the bodily violation of women. Beginning as far back as its second season, when Scully was initially abducted, the imagery the show used to tell its Frankenstein narrative of genetic manipulation always depicted things like the harvesting of ova or the growing of alien fetuses in clinical settings. There were always plenty of clean white rooms, beakers full of specimens, and faceless men in lab coats. Women, subjects, were penetrated by needles or scopes or scalpels, as if that somehow made it less of a violation.

Indeed, as anger over the revelation by CSM that he is William’s father erupted amongst the show’s heavily female fan base, many commenters pushed back by noting the ways in which this forced impregnation has already been at the heart of that show’s mythology for over 20 years. The question seemed to be “why the outrage now?”

In fact, despite Carter wanting viewers to read what was done to Scully as an “impregnation by science”—which we are told through a flashback to an always troublesome season seven episode “En Ami” (written, ironically, by William B. Davis himself)—this is manifestly contradicted by the details of the scene. Scully’s violation is coded in the trappings of date rape. There’s a car ride, a dinner, going willingly with someone she knows, then waking without memory in a bed, in a different set of clothes.

To put it bluntly, there’s not a lab coat to be seen. We are meant as viewers to read this as potentially a rape, in its very traditional meaning. Scully herself fears it when she retorts to CSM’s offer of coffee the next morning by saying she would like hers “unadulterated.” The attempt to gloss over a straightforward reading of his imagery hurts more than the plot point itself. He’s telling us we are overreacting when what we are doing is taking his filmmaking seriously, in all of its implications.

Furthermore, the trope of date rape continues because Carter applies some narrative rohypnol. Scully remains, for 15+ years, unaware of what has been done to her. She can never fight back because she never even knows she should be fighting. While the character may herself proceed into this upcoming season still unaware, we as viewers now know the violation that has been done to her, one which casts a festering shadow of rape over every tender moment of connection between she, Mulder, and her son, stretching back three seasons and a movie. It’s a move that feels analogous to watching a beautiful place that you’ve loved be desecrated and vandalized.

So given this trope of forced impregnation and childbearing in the era of #metoo, even in the context of science fiction and dystopian narratives, what constitutes an empathetic and ethically told rape story? The answer cannot be that rape and assault are forbidden subjects for writers and creators. These things exist in the world and are a tragic part of many (women’s, men’s) lives. Well-told stories should deal with them. Similarly, the answer cannot be that men are forbidden from writing about women’s experiences any more than women should be forbidden from writing about men’s.

Much of the outrage over The X-Files’ plot point crystallized around the fact that this revelation was clearly intended to more to shock and horrify than anything else. And even if the unreliable narration of CSM turns out wrong, as fans hope and pray, there will be the inexcusable fact that the show raised the specter of assault and rape in such a way that obscures the psychological and emotional ramifications of such deeds for a cheap twist. Because Scully remains in the dark, there is no possibility for wrestling with the implications of her assault (for example, the fact that it would mean she gave birth to her partner’s half brother). In contrast, the entire narrative of The Handmaid’s Tale focuses on all the small ways in which the subjugated characters reclaim their power.

There cannot be a single answer to how stories can responsibly depict assault, but we might begin by asking whether the story continues to strip the character of her agency and choice, or whether it affords her the dignity and means by which to reclaim it. I remain hopeful that’s not an impossible task. The plight of the Handmaids, their resilience, and the power they retain in the face of their circumstances are a start.

Jen Stewart Fueston (@jenniferfueston) is a poet, teacher and fangirl who co-hosts Gin & Topics (@Gin_and_Topics), a pop culture podcast currently reviewing seasons 10 & 11 of The X-Files. Her geek cred includes having written herself (yes, as a Mary Sue) into a Star Trek: TNG fanfiction story at age 15, and actually having taught a college course that required her students to watch the entire Lord of the Rings trilogy. She lives in northern Colorado with her husband and two Star Wars-obsessed young sons, and teaches writing at the University of Colorado, Boulder.