Seriously, people -- how do we even have to have this conversation? I am disappoint. 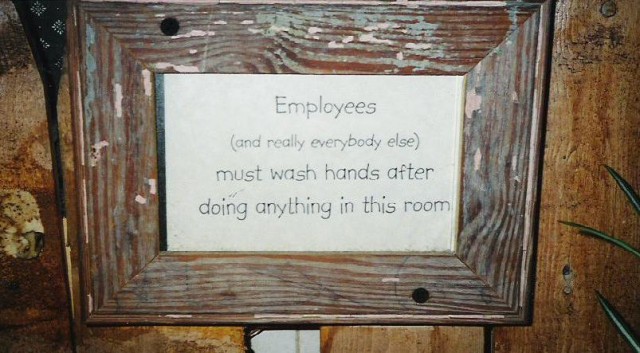 Here’s a story I need your help on, folks, because I can’t tell if it’s depressing and gross or gross and depressing. According to a recent study by Michigan State University, only 5% of people wash their hands properly after using the bathroom. That’s right, folks — 1 in 20 of you are doing that right, and the other 19 are, statistically speaking, disgusting.

While the fact that just 1 in 20 people took the time to wash their hands correctly seems disappointing enough on its face, the numbers turn into even more of a bummer if you parse them a little further, showing that one third of people used no soap while washing their hands, and 10% didn’t wash at all. Which…eugh.

The numbers are especially dismaying if you’re a dude. We’re…we’re not making a good showing of it, fellas. The report shows that only 50% of us use soapwhen washing, compared to 78% of women, and we’re more than twice as likely not to wash our hands at all.

In the interest of a small piece of public service: There’s a right way to do this folks, and it’s with hot water, soap, and 20 seconds of due diligence. What can I say — lessons taken from years of renewing food handler’s licenses die pretty hard. Don’t take my word for it, though — here’s a handy reminder from Sesame Street. Because apparently, we need it.

(via Eurekalert, image via flickr, featured image via TerryJohnston)