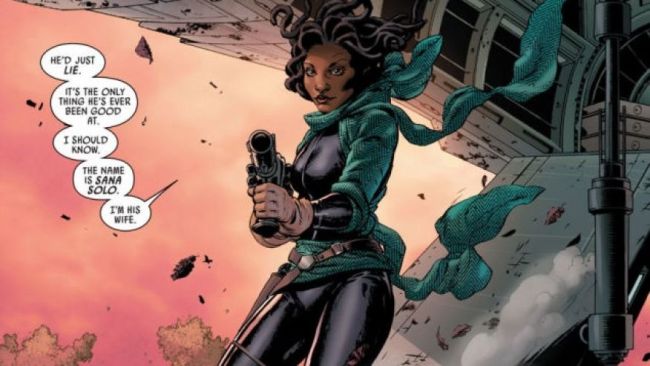 It might not be entirely true, but get excited anyway: according to rumors shared with Mashable’s Jeff Sneider, the Han Solo Star Wars Story is in search of a non-white female lead to apparently star next to Alden Ehrenreich’s Solo. Looking at the newly canonized history of Han Solo as presented in Marvel’s Star Wars comics, one prominent character of color who could conceivably be the female lead pops right up: Sana Starros, aka Han Solo’s wife–y’know, before Leia and all.

Interesting article. Last I heard, HAN SOLO search for female lead was down to 4 girls… and they weren’t white. https://t.co/GTCDqzz1Rs

Okay, okay, she’s not exactly his wife per se. They did get married, according to the comics, but only as part of a robbery. Eventually Solo would make off with Starros’ cut of the profits, leading her to chase after him across the galaxy which is I guess a fairly common occurrence with the women in Solo’s life. Her debut in the Star Wars comics was a revelation as it’s a fairly major deviation from the old de-canonized expanded universe Solo history. The handling of her back story and her connection to Solo had received a bit of criticism, but it’s certainly still refreshing to see the introduction of a major character who also happens to be a woman of color. Here’s hoping the movie can do right by her.

There’s certainly no love lost between the two of them, and if this female lead role turns out to be Starros, it’ll be super, super exciting to see their relationship play out on screen.

While we’ve got our speculation hats on, who do you think would make a good Sana Starros? Sound off in the comments, why not?