Guy Attempts to Survive Solely on His Wife's Breast Milk 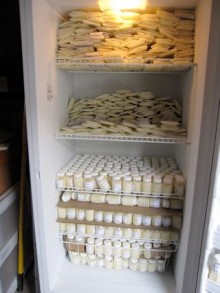 When Curtis and Katie’s newborn baby spent time in the Neonatal Intensive Care Unit, Katie formed a habit of pumping breast milk every two hours for fear it would dry up. Their second child went into the NICU, so Katie began the frequent pumping once again, eventually donating the excess milk once it was no longer needed. Katie got pregnant again after the second child, and once again, the baby had to head to the NICU, so she got to pumping yet again, but this time milk banks would not take the milk the couple attempted to donate for a variety of reasons, one of which being the medicines she was on at the time of pumping.

So, Curtis and Katie had a large freezer (pictured left) of frozen breast milk. The couple eventually had to move, and they found that transporting all of the saved milk would cost more than they were willing to pay. Rather than throw the milk away, Curtis decided he would drink the milk and see how long his body could survive on only the breast milk. Naturally, the couple is blogging the experience, with the third day’s blog post currently sitting atop the blog, entitled “Day 3 and no BMs.”

Even though the third day’s blog post’s title may seem a little silly, Curtis and Katie seem to be taking the experiment seriously, testing the breast milk and tracking Curtis’ weight and caloric intake. The couple measured out that the breast milk contains around 27-32 calories per ounce, so Curtis must intake 66 ounces of the breast milk per day in order to reach the standard 2,000 calories a day.

In a blog post covering day 1 and 2, Curtis claims he is no longer hungry, and instead, hunger manifests as thirst that he quenches with 16 ounces of breast milk, which keeps him satisfied for two to four hours. In the day 3 blog post, however, he begins with saying that he is much hungrier than the previous day, and instead of the 66 ounces outlined, he imbibed 104 ounces of the milk. He also claims that, so far, he isn’t having anymore stomach issues that he generally experiences, such as acid reflux and stomach aches and nausea, though he does claim that in place of the bowel movements he isn’t having, he is experiencing a lot (he stresses that it is a lot) of gas, but “it isn’t too rank.”

So, why don’t you all stop the low-carb diet and switch to the no food, all breast milk diet? Maybe Katie should’ve gotten into contact with that ice cream company.

(Don’t have a cow, man via Gothamist)