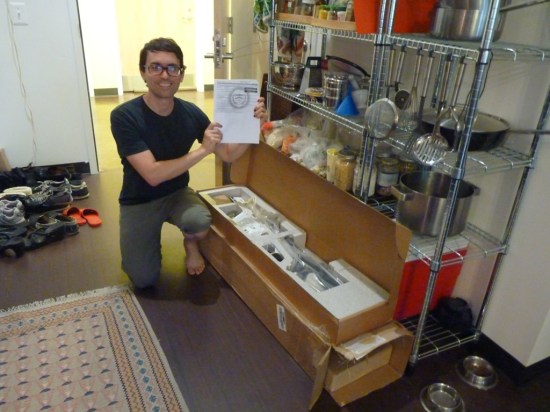 Since this is 2012, you’ve probably purchased something from the Internet before. Since you made a purchase over the Internet, it’s likely that something went wrong with the order; receiving the wrong item, a shipping address misunderstanding, or perhaps an incorrect charge on your credit card. For Washington D.C. resident Seth Horvitz, his television purchase on Amazon took a very odd, somewhat dangerous turn when instead of said television, he received a very large gun.

He ordered the television through a third-party vendor, so the gun in the television’s place was not as much of Amazon’s fault as it could’ve been. Rather than the new television, he received a Sig Sauer SIG716, which happens to be a high-calibur semi-automatic rifle. Horvitz did the responsible thing and, rather than test out his new television replacement, called the Metropolitan Police Department.

Horvitz not only called the police because there was an enormous unwanted gun in his apartment, but because assault rifles are illegal in D.C., as is transporting them into or through D.C., so Horvitz wanted to make sure he didn’t go down for unintentional criminal activity. Considering transporting assault rifles is illegal, Horvitz needed the police to come get it; if he drove it to a nearby police station, he technically would’ve committed a crime.

Somewhat fortunately for the sanity of all people receiving mail, the third-party vendor didn’t just replace the television with a gun, but it seems two orders were mixed up somewhere along the way. The gun was intended for a gun shop in Pennsylvania, and must’ve somehow been mixed up with Horvitz’s television. It seems difficult to mix up a gun meant for a gun shop in Pennsylvania with a television meant for an apartment in Washington D.C., but at least there was a mixup rather than some plot to ship off assault rifles to get D.C. residents in trouble.

Frighteningly, the $2,132 assault rifle was left in the hallway outside Horvitz’s apartment, as one would do with a less dangerous package. Equally frighteningly to people who like their expensive tech kept safe, if that were the new television he was supposed to receive, that also would’ve seemingly been left in the hallway.

So, the moral here is the moral we’ve always known: Ordering innocuous items online can be a little sketchy, or in Horvitz’s case, extremely sketchy and can get you arrested. Next time you order that seven-year-old turkey-flavored soda, make sure you aren’t getting some kind of weapon in return.