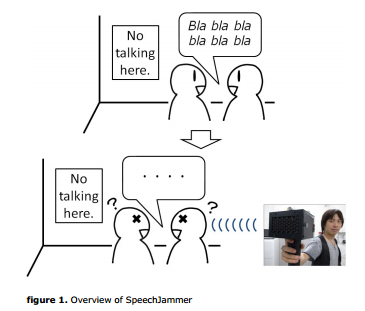 Sometimes you just need to make someone shut up. Up until now, actually pulling that off has been a fairly difficult feat. You can rely on a “shhhhhhhh,” or a smartly crafted insult, or a wad of duct tape, but those methods can be ineffective, difficult, and assault, respectively. Worry no more, thanks to researchers at the National Institute of Advanced Industrial Science and Technology, and Ochanomizu University in Japan, you can now shut someone up by shooting them with a Speech-Jamming Gun. Of course, you can shut someone up by shooting them with a normal gun too, but the speech-jamming gun provides the added bonus of not killing them, valuable functionality indeed.

Kazutaka Kurihara and Koji Tsukada are the masterminds behind this clever device that can literally shut someone up from a distance. It seems odd that some kind of projectile — actually more like a beam —  weapon could force someone to stop barfing mouthwords, but it can by exploiting a very simple principle: You can’t talk when you have to listen to yourself at a slight delay.

The gun itself is actually a combination directional microphone and directional speaker, which is what enables its long distance capability while eliminating collateral “damage.” The process is simple, the gun records the speech of the speaker it’s pointed at and fires it back at them on a .2 second delay. The result is that the speaker’s brain sort of garbles the input and output and they have to stop.

Reportedly, the gun seems to work better when the delay time is varied. It also works better on people who are reading aloud rather than those who are talking off the top of their head. The only point where the gun really fails is when it comes to non-verbal speech. That is to say, if you were trying to recite some Shakespeare and someone shot you with this gun, it would probably shut you up. But if you were shouting gibberish at the top of your lungs, it wouldn’t be much help.

When it comes to applications, Kurihara and Tsukada point out the obvious library applications, completely ignoring wide potential for such a device to be used on middling prank-centric television shows, in domestic arguments (one’s that haven’t already devolved to shouting gibberish at the top of your lungs), at public readings by authors you don’t particularly like, and in classes and lectures of every single grade level. And although library usage is the most obvious and banal application, I think I would like to see it happen because, seriously, what cool be cooler than a library gunslinger?