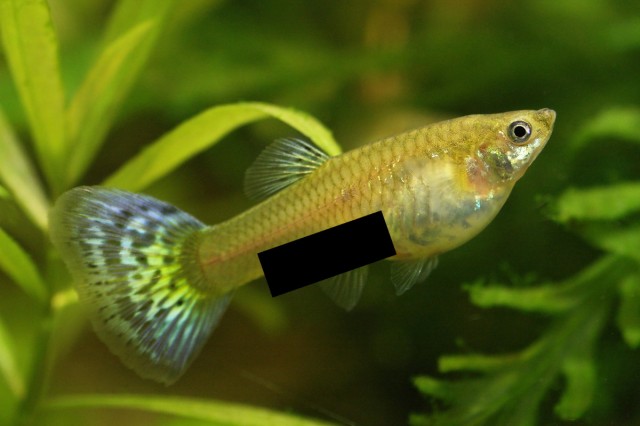 The world of guppy genitals has been called an “arms race” which sounds horrifying enough without the knowledge that male guppies have claws at the end of their genitals, but as it turns out they do. A new study looked at exactly what purpose the genital claws serve, and as you might imagine, it’s a rather unpleasant one.

Sexual conflict exists between animals when the fitness interests of males and females of the species are different. For guppies, and a lot of other animals, producing sperm is much easier than producing eggs. The goal of the male is to fertilize as many eggs as possible, while females only want to mate with males that meet whatever criteria makes for a dashing male guppy.

This conflict leads to widely varying genitals between species, even very similar ones, and it’s also led to Poecilia reticulata guppies developing a pair of claws on the tip of their gonopodium, which is more or less their fish penis.

To test ideas on exactly why the male guppies have penis claws, University of Toronto PhD candidate Lucia Kwan removed the claws in a group of male guppies, leaving the rest of their gonopodium intact, and compared the amount of sperm they transferred during mating to that of a group of unaltered males.

The conclusion was that the fish use their gonopodium claws to hold on to resistant females during mating. It’s brutal but effective. Kwan says:

Clawed males transferred up to three times more sperm to unreceptive females compared to declawed males. The claw has evolved to benefit the males at the expense of females, and implicates sexual conflict between the sexes in the diversification of the genitalia in this family of fish. This provides support that this important selective force is behind an evolutionary pattern that evolutionary biologists have been trying to unravel for over a century.

(via University of Toronto, image via Dornenwolf)