Gremlins is THE Holiday Movie of 2020

At first glance, it seems easy. A strange, novel thing has entered our lives but if everyone follows the relatively simple rules, we’ll all be safe. It’s only when people get lax and let their guards down – or when they flat out ignore the rules completely – that the evil is unleashed and everyone’s lives are put in danger.

I am, of course, describing the plot of Gremlins. The monster holiday classic from 1984 that truly captures the horror and chaos of 2020 as no other Christmas movie can.

For any young millennials or gen-zers that might have missed out on this campy classic, Gremlins tells the story of the Peltzer family. Billy (Zach Galligan) lives with his parents in a small suburban town and works at the local bank to help them out while his dad pursues his dream of being an inventor. While in the city, his father stumbles upon a small shop in Chinatown and discovers a creature called a “mogwai” and decides it would be the perfect Christmas present for his son. The shop owner refuses to sell him the adorable creature because of the amount of responsibility required to take care of it. Unfortunately, his grandson sells the mogwai to Mr Peltzer behind his back. The rules for taking care of it are relatively simple: no bright lights or sunlight, don’t get it wet, and don’t feed it after midnight – no matter what!

Naturally, almost as soon as the mogwai (now named Gizmo) comes home for the holidays, the rules start being broken. Gizmo gets wet and immediately spawns four or five other mogwai. These newcomers are much more aggressive and mischievous than their mogwai forbear and they manage to eat after midnight. They metamorphosize into “gremlins” – chaotic monsters who revel in destruction and excess. When their leader jumps into a swimming pool they breed exponentially and take over the entire town, leaving death and disarray in their wake. Billy’s attempts to stop them are stalled by a sheriff who refuses to believe it’s happening until the gremlins come for him. By then, it’s too late to stop the rampage, and Billy is forced to take drastic measures (burning down the town’s movie theater) in order to stop them.

The gremlins (and the townsfolk varying reactions to them) are what make this film a morality tale for 2020. The gremlins feel like a metaphor for the corona virus: they’re ability to spread, especially when the rules are ignored, and the randomness with which they attack their victims.

But even more so, they feel like a condemnation of the anti-maskers. The people who think the rules don’t apply them. The people (not essential workers) who balk at safety curfews. Who are out there packing the bars and the movie theaters. Who are holding super-spreader caroling events. Who pack the mall. Who don’t seem to care that their actions are leading to the death and pain of so many others because their need to have a good time trumps all. 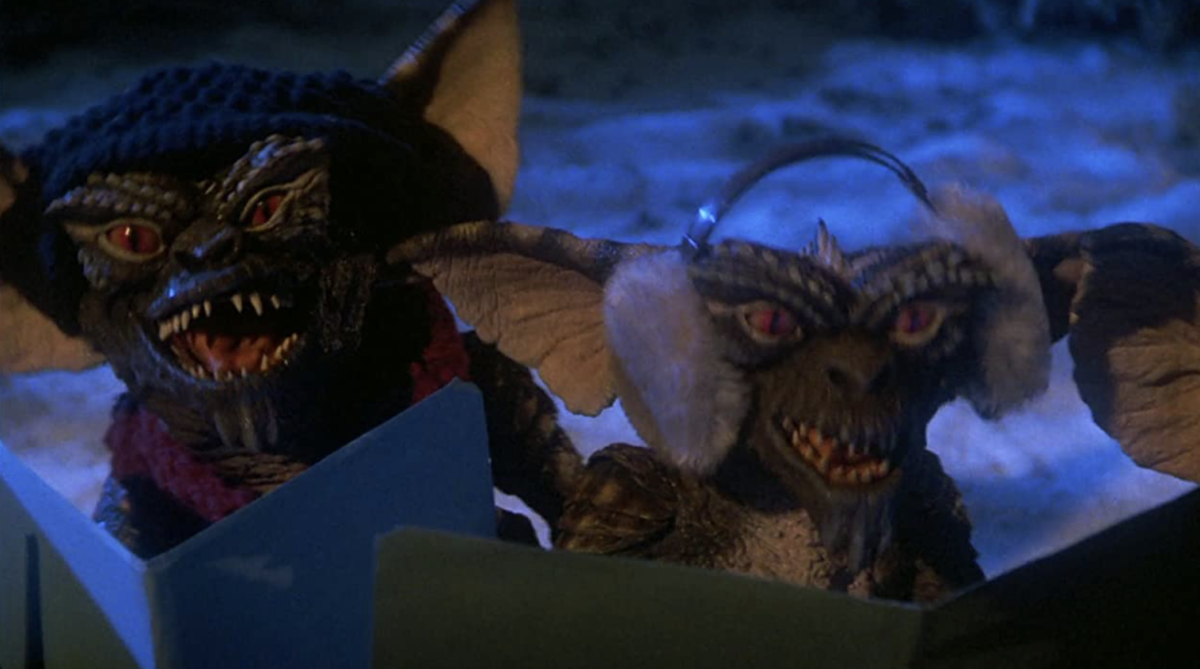 The gremlins are pure id: they fill their bellies with beer till they balloon cartoonishly, they smoke five cigarettes at a time, they crash cars (with people still inside them) because they love the spectacle and the noise. They visit the elderly and kill them (and it’s true that Mrs Deagle is a monster in her own right, but a lot of grandparents also voted for Trump both times so…) And, much like the anti-maskers, they have no regard for human life except as a vehicle of entertainment or service to them. Kate (Phoebe Cates) is forced to bartend for them when they take over her moonlighting job at the local tavern. She becomes the food service (or retail) worker who, abandoned by her local government, is put at risk of being murdered by monsters because she needs to make ends meet.

And if this all feels too bleak fear not. Gremlins gives us the schadenfreude that we are all desperately craving right now. The monsters eventually get their comeuppance in increasingly, cartoonishly grotesque ways. They get microwaved, they get blended, they get roasted in a movie theater, and finally, blasted by a hit of sunlight. And while we can’t (and shouldn’t!!) enact some of our darker fantasies that might arise when we read that Kirk Cameron has hosted yet ANOTHER super-spreader caroling event, we can watch Gremlins and take comfort that a new day and a new year is dawning.