Researchers Discover What Makes A Successful Grass | The Mary Sue 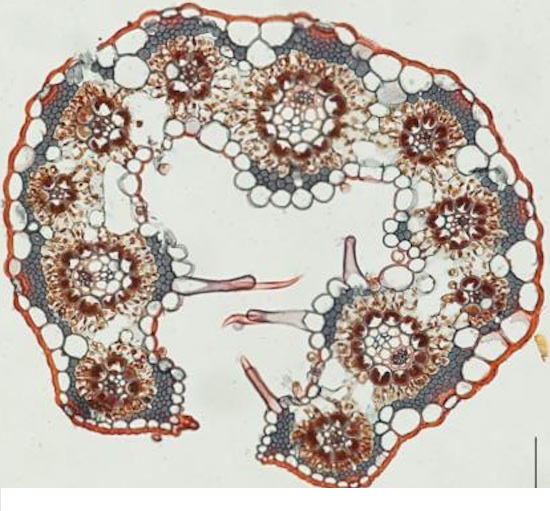 Researchers at Brown University have found the anatomical and evolutionary basis behind the fact that some varieties of grass really are greener than others — or at least why they’re able to produce food for themselves via photosynthesis more effectively than their cousins. According to a study in the Proceedings of the National Academy of Sciences, a slight difference in the cellular structure around the veins in blades of grass can make the difference between a grass that is highly efficient and successful and one that just putters along.

In a study of 157 different kinds of grass from around the world, researchers led by Erika Edwards at Brown University found that grasses that were most successful at transforming sunlight into food had a slightly different cellular structure, developed some 60 million years ago, before it would have been evolutionarily advantageous. The most efficient grasses were ones that had more “bundle sheath” cells surrounding the veins that carry CO2 throughout the plant. These large cells facilitate the transport of CO2 through the plant, and are more efficient means of transport. They can also cut down their CO2 intake when the molecule is in short supply, making life less pleasant for the grass leaf, but also keeping it in a sort of survival mode during lean times.

These new insights could offer a boost to researchers looking to improve on crops through genetic engineering, showing the way towards successful grasses that can thrive in less than optimal conditions, like hot, dry environments. They could also potentially offer clues to more efficient photosynthesis that could prove valuable to researchers looking to take the lessons of biology and apply them to solar cell technology, harnessing artificial photosynthesis to produce energy for homes and businesses. It remains to be seen, however, what effect this new discovery will have on people’s perceptions of what side of a fence a thing is better on.