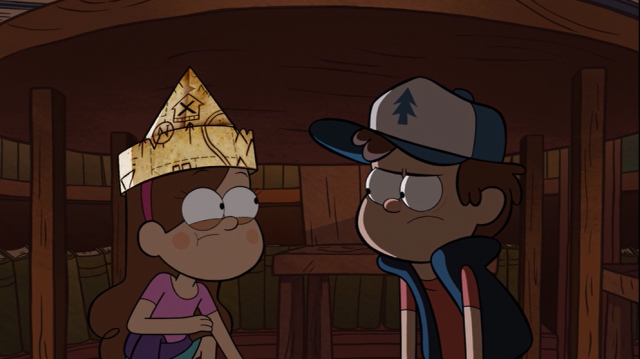 The twins attend Gravity Falls’ Pioneer Day celebration, and returning Popular Rich Girl Pacifica Northwest mocks Mabel for being “too silly” in front of the town. Determined to prove she’s serious, Mabel offers to help Dipper crack the conspiracy surrounding the founding of Gravity Falls; meanwhile, Stan’s attempts to escape the festivities end with him spending the day in Ye Olde Stocks.

For everyone who waited on tenterhooks, and ultimately in disappointment, wondering about the future relevance of Congressperson Mabel and the President’s Key, I have the answer for you: this is another one-off story contribution. Though the script was penned by McKeon and Hirsch, the plot came from David Slack, who’s better known for being a recurring contributor to the Teen Titans cartoon (and the writer of its finale, “Trouble in Tokyo”) and Law & Order. While there will definitely be future magical or weird creatures who bound off into the world of GF never to be seen again, increasing its weirdness, this is pretty much the last time an important item is gifted to the twins without it coming back in some form or other.

This is a great episode. As you’d expect with Hirsch on frontline writing duty, it shines above and beyond in its depiction of the twins’ relationship. Legend has it that there was a piece of paper passed among the writers for writing Dipper and Mabel, with the foremost rule that “they like each other.” They fight and make up fast, they have inside jokes, and because they’re far from their comfort zone, they’ve gotten closer over the summer (someone, somewhere, must have the exact content of this mandate, but as I write, I’m only able to summarize it as I recall). And that’s not only very true of the banter, but in how well both the little details and grander thematic touches are balanced.

For example, while Mabel’s outside-the-box creative thinking gets the spotlight here over Dipper’s more logical reasoning (a really nice element that’s not depicted enough as a valuable type of intelligence), you also have the contrasting element of each sibling’s reactions to Pacifica: Mabel is powered by a strong initial burst of anger, but her need for revenge as comfort fades away once she regains confidence in herself; but Dipper’s grudge only begins once he sees Mabel’s feelings hurt, and it stays (in fact, it’s going to low-key continue well into the second season). Mabel feels deeply but recovers quickly while Dipper holds things under the surface and has trouble letting go, character traits that affect how they approach the world not just in a single scene or element (romance, most obviously) but across the show. That’s just solid writing. And given how often the idea of “women are catty liars, men wear things on their sleeves and move on” pervades a lot of American culture and comedy in particular, it’s nice to see an exploration of the reversal.

Speaking of comedy, there is some all-time gold in this one. While it’s unmistakably a National Treasure riff, it stands perfectly well on its own without knowledge of the reference—even that fantastic, direct “we’re in” joke. It’s the absolute best way to do a parody episode, drawing in broad strokes without dating the material or locking out a segment of the audience, something that the GF writers will continue to show skill in as the show goes on.

This is also a fairly unique role for Durland and Blubs, infinitely more active than what they’ll get to do for pretty much the rest of the series—but I don’t think that’s actually a bad thing. It gives the writers a chance to play out all of their best “incompetent cop duo” tropes in one go and then write out the reason that these two were so involved in the first place (the conspiracy); that way, we know the two of them better (and their beautiful blossoming romance, which started out as a joke twist one the “superior officer is constantly shouting at the rookie” trope), and then they can be brought back whenever the writers have a good bit without being forced into the spotlight. 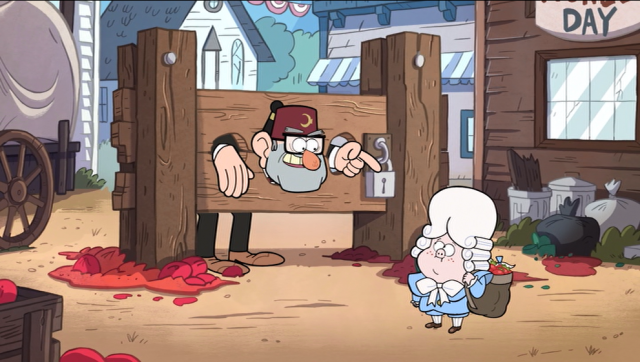 It’s interesting that this episode has that cute little joke about VERY SERIOUS BUSINESS CONSPIRACIES, since the show’s fandom was only beginning to grow into the full laser-focused monolith that it would eventually become (and once again, it’s a great joke partially because it applies to Dipper’s character as well as potentially being a little nudge at the audience). But speaking of conspiracies, hoo boy. Dipper’s name. Only a minority stuck with the fairly on-the-nose idea that Trembley referring to Dipper as “Roderick” was actually a sneaky way of telling us his real name (with that whole silliness-is-actually-apt theme), but the furor over what that name might be has raged just about as long as the show itself. At least as long as “Double Dipper,” when we learned that Dipper was definitely a nickname.

And it rages still, if you were wondering. Hirsch has given out two hints: one during an in-character interview (as a not yet introduced character) saying “if I had that name I’d be embarrassed too,” and another on his Twitter saying that Mabel and Dipper’s names share some kind of common characteristic (first letter? Number of syllables? Feel free to throw in your guess, ‘cause I doubt we’ll find out anytime soon). There was a rather well-traveled hoax that made a fake tweet screenshot of Hirsch revealing the name to be “Michael,” but it was debunked (still, if you see that option floated, now you know why). 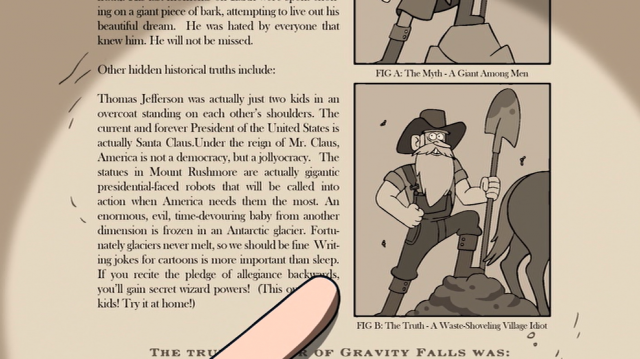 CREDITS CIPHER: E. Pluribus Trembley (latin for “out of many, Trembley).

As always, on-screen text means a bunch of secrets and bits of foreshadowing, as well as payoff for Stan’s jab about Ben Franklin looking like a woman in “Legend of the Gobblewonker.” In other revelatory news, Thomas Jefferson was actually two kids standing on each other’s shoulders (and if you think that’s the last time there’ll be an opening for a Hamilton joke you’d be wrong), there’s a giant baby frozen in the glaciers, and technically the USA is a jollyocracy run by Santa Claus.

Also, there’s something very strange about the top of the pyramid on Trembley’s negative $12 bill, and if you decode the serial number on that same bill, the code reads “BLIND” (thanks again to the Gravity Falls Wiki, because that particular code is not an intuitive thing). Strange, indeed. 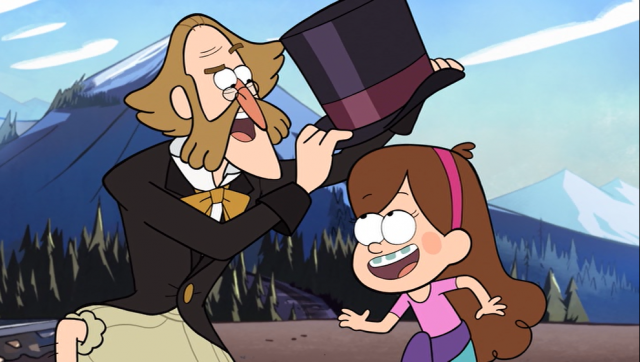 Dipper’s attempt to do the very serious IN MY INVESTIGATIONS voice is completely fantastic in retrospect. Because Ford would absolutely, unreservedly adore it. That voice fits perfectly with Ford’s attempts to paint himself as the bold, lone hero whose übermensch qualities will allow him to save the world and bring eternal peace and harmony yadda yadda yadda. Y’know, the damaging fantasy that got him into trouble at pretty much every turn. It’s interesting to see Dipper pick up on it just from reading, partly from a shared desire to be that object of adulation, and probably because he’s modeling himself after the voice in the Journal (just as Ford no doubt modeled himself after fictions that also reinforced that savior image). The fact that Mabel is the crucial piece in solving something the Author couldn’t (something which Ford doesn’t acknowledge right away when he comes back) is also excellent foreshadowing for the crux of the finale.

And speaking of that “blind” code, the entire concept of a replaced founder, aggressive secret keepers, and protectiveness of the lie foreshadows BOTH the Society and the ultimate resolution of Weirdmaggeddon. Secrecy and lies are built into the town from the ground up, it seems, and no amount of individuals uncovering the truth will change that—perhaps explaining why all the Pines ultimately leave to go on their own adventures.

Vrai is a queer author and pop culture blogger; they presently remember sleep as a long-forgotten dream. You can read more essays and find out about their fiction at Fashionable Tinfoil Accessories, support their work via Patreon or PayPal, or remind them of the existence of Tweets.