Is There Anything It Can’t Do? Researchers Propose Artificial Muscles Made Of Graphene 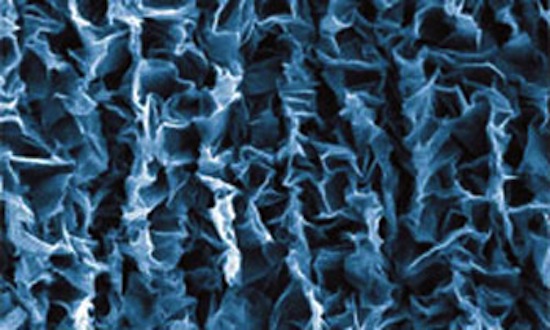 We’ve seen graphene do some amazing things, but every time we think we’ve seen the coolest potential application for the wonder-substance, it continues to impress. The latest impressive feat? Researchers at Duke University have taken advantage of one of the things that makes graphene difficult to work with — the fact that it “crumples” easily — and turned that quality into a desirable trait that they can control. By running the show as graphene crumples and flattens out, the team could one day use the substance to form artificial muscles that expand and contract on command.

If graphene just crinkled and crumpled like the latest memo fulfilling its destiny as a trash can basketball, it wouldn’t be so hard to work with. According to researcher Xuanhe Zao, though:

…graphene is more like wet tissue paper. It is extremely thin and sticky and difficult to unfold once crumpled. We have developed a method to solve this problem and control the crumpling and unfolding of large-area graphene films.”

That could allow researchers to tweak graphene with a number of interesting properties, like changing from opaque to clear depending on whether it is in a crumpled state or not, but the really exciting thing is that it opens the door to graphene products that can be made to contract and relax on command — a sort of artificial muscle that tenses when a current is applied to it, and releases when the juice is cut off. That technology is still in the offing, but its not impossible that when the robot uprising arrives, graphene will provide the artificial muscles that through you through a picture window. Until then, though, the lab-built muscles could also be used in new generations of prosthetics, so we’ve got that going for us.