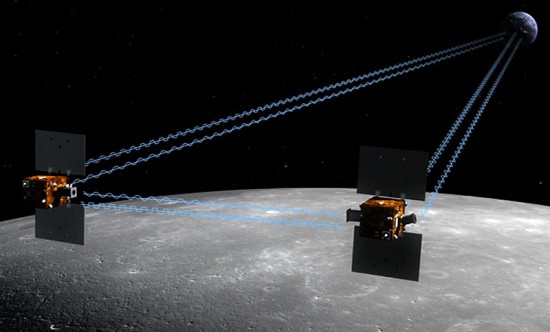 At 3 PM EST, the first of the two Gravity Recovery and Interior Laboratory (GRAIL) probes completed its main engine burn and entered orbit 56 miles over the surface of our moon. The first probe, creatively named GRAIL-A, will not have long to wait for its twin GRAIL-B, which will enter orbit today around 3 PM EST. Once the two probes are in place over the moon, scientists will have a unique science platform which will provide them with a better understanding of the moon’s composition.

Here’s how it works: Once the science portion of the mission begins in March, the satellites will communicate the distance between GRAIL-A and GRAIL-B back to Earth. As the probes pass over the lunar surface, changes in the moon’s gravity will cause the spacecraft to move slightly. Since gravity is a property of mass, these subtle fluctuations will give scientists a view of hidden masses within the moon — in addition to visible features on the moon’s surface.

Once their mission is complete, scientists will have a high-resolution map of the moon’s gravitational field. With it, they hope to not only understand more about the moon, but also about the formation of rocky planets.

However, all that won’t start until after both the probes are in position, meaning there’s plenty of work to be done. GRAIL project manager at NASA’s Jet Propulsion Laboratory David Lehman said:

“[Today] may be New Year’s everywhere else, but it’s another work day around the moon and here at JPL for the GRAIL team.”