Papyrus Fragment Indicates There May Have Been a Mrs. Christ 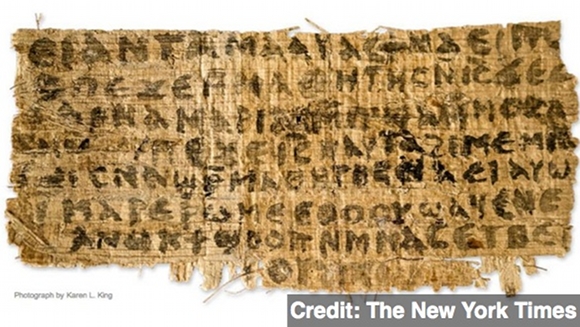 According to a mysterious piece of papyrus discovered by Harvard Divinity School professor Karen L. King, eternal presumed bachelor Jesus may actually have been married. [INSERT OBLIGATORY DAN BROWN/THE DA VINCI CODE REFERENCE HERE] The business card-sized fragment has on it eight incomplete lines of writing plus a few words and letters amidst other too-damaged-to-read text, but the phrase that’s causing all the buzz is this one: “Jesus said to them, my wife.”

Though it’s referred to in academic circles as “The Gospel of Jesus’s Wife,” the fragment—which scholars believe dates from the fourth century, i.e. centuries after Jesus would have died—sheds less light on the possible identity of Jesus’ possible wife than it illuminates (haha, manuscript jokes) goings-on in the early Christian church. Explains King, “From the very beginning, Christians disagreed about whether it was better not to marry, but it was over a century after Jesus’s death before they began appealing to Jesus’ marital status to support their positions.” (Am I the only one wondering what fourth-century WWJD bracelets would look like? Yes? No?) The fragment could well come from a piece of really, really old fanfiction, with the author writing Jesus as married to support their position that marriage is A-OK, and ladies are fine, Jesus was even married to one of ’em!

“The discovery of this new gospel,” King continues,

“offers an occasion to rethink what we thought we knew by asking what role claims about Jesus’ marital status played historically in early Christian controversies over marriage, celibacy, and family. Christian tradition preserved only those voices that claimed Jesus never married. The Gospel of Jesus’s Wife now shows that some Christians thought otherwise.”

Though it’s not exactly a once-in-a-lifetime thing for an ancient piece of papyrus to be discovered that adds to—or complicates—our understanding of Biblical history, this particular discovery is pretty interesting (to me, anyways) in that it challenges the traditional Biblical view of woman’s relationship to man. Journalist Michael D’Antonio, in a blog for The Huffington Post, puts it like this:

“Beyond internal Catholic Church politics, a married Jesus invites a reconsideration of orthodox teachings about gender and sex. If Jesus had a wife, then there is nothing extra Christian about male privilege, nothing spiritually dangerous about the sexuality of women, and no reason for anyone to deny himself or herself a sexual identity.”

Not that the fragment changes the Bible you’ll find on the shelves at Barnes & Noble at all—but it’s still pretty neat that things like this keep popping up. And I kind of like the fanfic theory, myself.