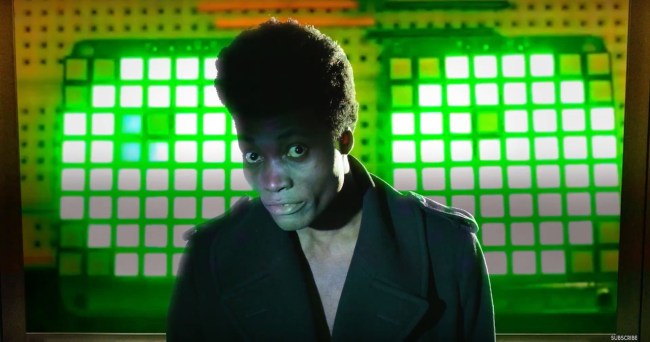 Gorillaz have come out of their six year dry spell with a brand new single titled “Hallelujah Money.” A collaboration with UK artist Benjamin Clementine, the politically-charged song comes accompanied by an equally charged music video, which you can see below.

Up front: the imagery in the video can be pretty disturbing, featuring stock footage of the Ku Klux Klan, the Children of the Corn, and other assorted Japanese horror movie cuts. These shots are shown projected onto Clementine, who stands in an elevator at an approximation of Trump Tower. The song is supposed to be a kind of almost-melancholy protest song, with Clementine’s chilling, almost ghostly delivery breathing cold life into lyrics such as:

Clementine’s entire verse is supposed to describe the “dream-like wondrous world” that Trump had promised to those who voted for him, a world that offers prosperity to a few while jealously, aggressively keeping everybody else out. It’s a very haunting song, to say the least, and the video’s complementing graphics just let it linger that much longer. The release of the song is no coincidence, either; it was released today to precede Trump’s inauguration tomorrow.

The announcement of the song came with a tweet from the Gorillaz’ Twitter account, which also mentions that more songs are being written, which is basically another confirmation that there’s a brand new Gorillaz album on the way for us. Joy.

(via Consequence of Sound)