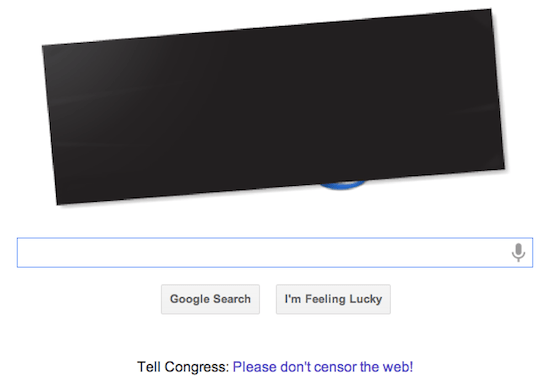 Along with a few other prominent sites, Wikipedia and reddit to name a couple, Google has come out in protest of SOPA. Though they didn’t take the blackout route like Wikipedia and reddit, which would’ve brought the Internet to something that would amount to a near-complete halt, Google displayed their feelings about SOPA with a tasteful Google Doodle, a simple black censor bar covering the iconic Google logo.

Underneath the logo, a simple text message appears, urging people to take action and tell Congress that they’re not in support of SOPA, using the phrase “End piracy, not liberty.”

Normally, when one clicks on a Google Doodle, it links to a Google search regarding whatever the Doodle is celebrating. In this Doodle’s case, it links to a short-but-sweet page containing some basic SOPA information, a small infographic, and a message imploring Internet users to speak out against SOPA and to contact Congress. Though Google didn’t blackout, which certainly would’ve sent a message as well as hampered everyone’s day on the Internet, the censor bar Google Doodle speaks loudly, and hopefully a giant such as Google joining the fight can help make a difference.