SOPA May Be Shelved, But PIPA Is Still On 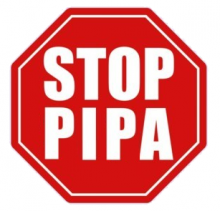 It’s been a good weekend for everyone who opposes SOPA and Internet censorship in general. In a statement on Friday, SOPA author and copyright infringer extrodinaire Representative Lamar Smith decided to drop the egregious DNS blocking provisions from the bill. On top of that, the White House responded to a pair of anti-SOPA and anti-PIPA petitions and came out against DNS blocking as well. With all that and SOPA “on the shelf” until the nerds can come in and a “consensus” is reached, we’re practically in the clear, right? Not quite. PIPA is still up for a vote in the Senate on January 24th.

Everyone has been rallying behind opposition to SOPA, which is admittedly a little worse than PIPA, but the result of that solidarity is that the latter has been able to fly a little more under the radar. While Representative Smith agreed to drop the DNS blocking aspects of SOPA, Senator Patrick Leahy, author of PIPA, is a little less ready to give up. In a doubletalk laden statement released last week, Senator Leahy was willing to go so far as to say that he’s “prepared to recommend we give [DNS blocking] more study before implementing it.” The key word being “implementing.” It looks as though Leahy wants to avoid discussion of the consequences of DNS blocking by offering an olive branch that basically amounts to “Don’t worry. We’ll take a good, long look down the barrel of that loaded shotgun before we fire it, but there’s no reason to take the shells out or anything.”

Similarly, while SOPA has been shelved until a consensus can be reached, a vote to set PIPA in stone will be happening on the 24th. Six Republican senators have put out a letter to Leahy, urging him to delay the vote so there’s more time for consideration, but as of yet, it’s had no effect. Worst case scenario, come the 24th, we could have a PIPA on our hands, picking up right where SOPA left off. While the initial prediction was that SOPA and PIPA would merge if passed through their respective sections of Congress, there’s nothing to keep PIPA from trudging on without SOPA.

Of course, there’s also that White House statement that comes out directly against DNS blocking, all but promising a veto if a bill with a DNS blocking provision should pass. Still, it’s no binding commitment, although there would be no reason not to veto considering SOPA and PIPA are an uncommonly non-partisan pair of bills, SOPA being pushed by a Republican in the House and PIPA being pushed by a Democrat in the Senate. That being the case, it’s not really campaign-endangering territory.

When January 18th rolls around, it’s not going to have much to do with SOPA anymore, aside from confirming that the tech community really wants to put the last nail in SOPA’s coffin and see it shredded for good. That being said, it’s important to turn some attention — a lot of it — towards PIPA. It’s dangerous as well, and it says something about name recognition that I had to MS Paint-up my own “Stop PIPA” graphic while you can practically drown in the image search results for “Stop SOPA.” Don’t let SOPA be a smokescreen for PIPA. Whatever you do for the 18th, whether it’s a blackout, a banner, tweeting, Facebooking, calling your congresspeople, or shouting incoherently in the street with anti-censorship body paint adorning your naked torso, make sure you mention PIPA. When we’re done, we want it to inspire the same chill of disgust that “SOPA” does.