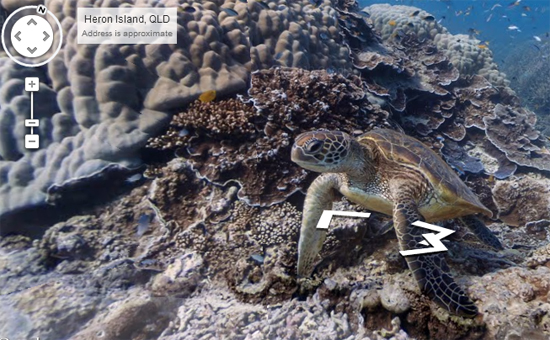 No longer satisfied with including things like Inuit villages and space centers, Google Street View has finally reached its logical conclusion. Where they’re going, they don’t need roads. Specifically, they’ve added panoramas from six different beautiful underwater locations. Now, for the first time, one can explore the Great Barrier Reef in much the same way as one might explore Seattle or New York without actually being there.

The project had Google partner with The Catlin Seaview Survey, which collected all the images, and spans six different locations: Wilson Island, Heron Island and Lady Elliot Island in Australia, Molokini Crater and Hanauma Bay in Hawaii, and the Apo Islands in the Philippines. All of these are now available to browse, with two sections each, using Google’s Street View technology.

The pictures, which do look remarkably similar to typical Google Street View images save for being underwater, were captured with a camera known as the Seaview SVII. The underwater camera is designed to capture 360 degree panoramic images every three seconds while moving at about four kilometers an hour. It even stores the geographical location and camera direction of the image, that way long-term studies can be conducted.

The implications for science here means that we’ll be able to study the exact same reef area with much better accuracy over time. For as much time as we’ve spent in the ocean, there’s a lot humanity still doesn’t fully understand. Anything that lets us accurately keep track of specific sections with regularity is a step up from previous efforts.

The implications for the rest of us? Super cool immersive underwater photography.