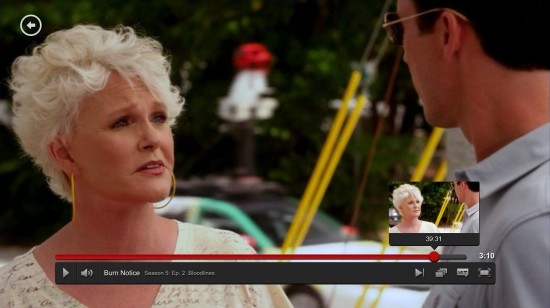 Google Street View is a pretty amazing service.  Not only can we check out if the only GameStop in the state that is carrying Ikaruga is in a sketchy area before we venture into the unknown, but the service allows simple folks with a web browser and an Internet connection to become armchair sleuths. Redditor 154james was watching an episode of USA’s veteran spy-MacGyver show, Burn Notice, and noticed a familiar car driving through the background. What you see behind Michael and Madeline Westen is the now-famous Google Street View car. 154james was curious as to where the shot was filmed, and crowdsourced the sleuthing to reddit. As one may expect, someone found out where the episode was filmed, but also happened to locate a shot of the filming on Google Street View, most likely taken from the very car that appeared in the episode.

Redditor thomasamadeusking provided a link to the shot of the film crew on Google Street View, and if one looks a little closely, Sharon Gless is wearing the same shirt in the Street View capture that she is in the above episode’s final shot. She’s to the left of the pole, behind the blue car. Now, the shot on Street View isn’t exactly the shot from the episode where we can see the car in the background, since Street View has a shot of the car in what would be the foreground, considering Gless’ position. Also, unfortunately, Jeffrey Donovan — if he’s even in this shot — appears to be behind the pole. You can, however, move around the map and get different angles of the film crew; this is Street View, after all. 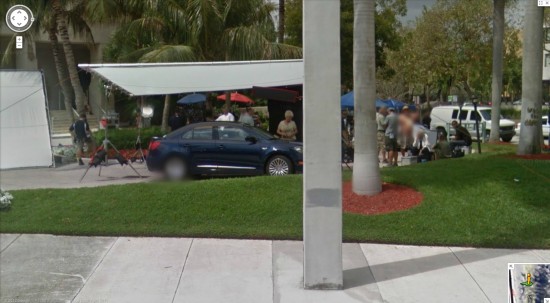 Thomasamadeusking explains how he found the captures on Street View, initially setting out only knowing that a Google car appeared in a Burn Notice episode:

I figured out where the main studio for Burn Notice was, looked for a place with some tall, grandiose looking buildings which were also close to the water, and then looked them up. Didn’t take too long. Ah the wonders of Google.

He makes it sound easy. Another redditor, an_ancient_cyclops, noted another Street View shot where someone on the crew appears to have noticed the Google car, and is coming to terms with the crew’s now immortalized fate. He’s over on the right in a peach-colored shirt. You can also see who appears to Jeffrey Donovan in this shot behind the blue car, though his face is somewhat obscured by lighting. The reddit thread is filled with Burn Notice jokes, so have at it if you like Burn Notice jokes. If you head over to the Street View capture, you can move around and check out some other angles, so give that a go as well. Kudos to thomasamadeusking, and kudos to 154james for noticing the car in the first place — something I failed to do as a regular member of the Burn Notice audience.