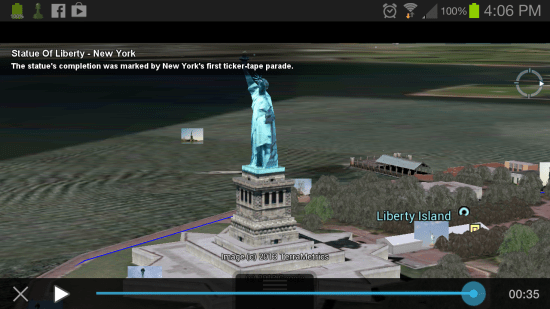 Good news, shut-ins! It’s now even easier to kind of see the world from your computer. Google Earth has added over 100,000 places in more than 200 countries to their Tour Guide feature. The Google Earth Tour Guide combines animated flybys of places, interesting facts pulled from Wikipedia, and even user-generated Panoramio images to get a better look. Why not kill a little time pretending to explore the globe? You might learn something.

The upgrade hit Google Earth today across the desktop, Android, and iOS platforms. As well as adding more places to Tour Guide, Google has also fleshed out the experience for places already listed. They say the combination of 3D flyover and Wikipedia facts will provide a “richer” user experience.

The Tour Guide clips are short animations, and at the end of each, users are shown a few selected images from Panorimio to give them a more detailed view of the area. I ran the one for the Statue of Liberty, and besides learning that New York’s first ticker-tape parade was thrown to celebrate its completion, Google Earth also had a nice collection of photos for me to look at when the animation was complete.

Tour Guide first launched back in October of 2012 with a paltry 11,000 locations, but this update is a huge improvement to that number. Tour Guide could be a great way to teach students about a location by giving them something to interact with rather than just a list of facts about a place. Writing my fifth grade report on New Hampshire would have been a lot more interesting if Google Earth and Tour Guide were around back then.

(Google via The Next Web)