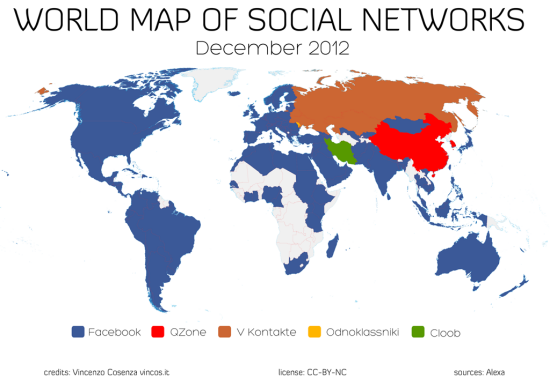 Risk, the game of world domination, is pretty popular among geeks. If you’re unfamiliar with the game, the board is a map of the world divided into territories, and the goal is to eliminate other players and occupy the entire world with your pieces. Vincenzo Cosenza’s latest World Map of Social Networks, showing which social networks dominate which countries, looks an awful lot like a Risk board, and if it’s any indication, Mark Zuckerberg is probably very good at the game.

The field has been narrowed down to only five players. Facebook is joined by QZone in red, V Kontakte in brown, Odnoklassniki in yellow, and finally Cloob in green. That’s pretty paired down compared to the version of this map from June, 2009: 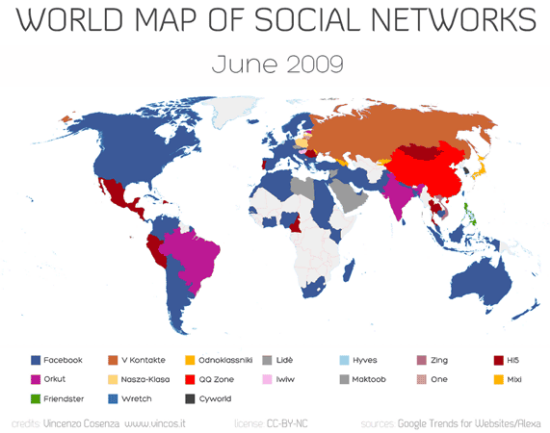 With 17 networks dividing the board things are a lot more spread out. There’s a lot of blue pieces out there, but the real key to winning in Risk is controlling whole continents, and in 2009 Facebook only had Australia. It’s easily defended, but hard to work one’s way out of.

V Kontakte has a lot of territory in Asia and Eastern Europe, but it’s hard to hold on to with so many fronts to protect. Orkut could still make a strong play to win South America, but no one else really has a chance here. Over the next several rounds Facebook continues to expand, knocking out player after player along the way. The trends in these maps over time clearly favor Facebook.

Of the 137 countries on the map, Facebook has control over 127 of them. This map doesn’t show the only social networks being used, just the ones being used the most, and Google+ statistics aren’t factored it, though they most likely wouldn’t change much. The 10 countries holding off Facebook’s domination are mostly doing so because their governments are censoring the site to some degree

It looks pretty decided who will win this game, but any Risk player will tell you that there can be some huge swings late in the game that really shake things up. Who knows, maybe another player is sitting on a huge trade-in and we’ll all be using Odnoklassniki by this time next year.