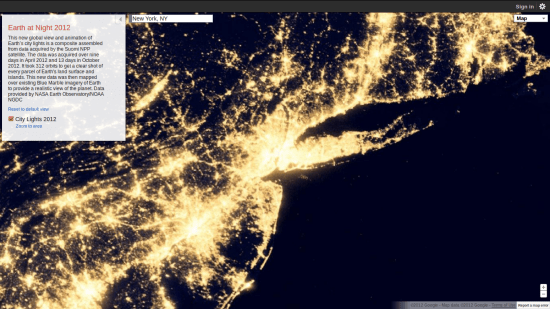 Last week we showed you a new series of NASA satellite photographs of the Earth at night. They were gorgeous, but what if you wanted to see what a specific place on Earth looked like at night? Now you can! It looks like Google went and overlaid the satellite images on top of their map service, and now it’s searchable. Type in your address and see what your region of the world looks like at night.

The images come courtesy of the Suomi NPP satellite which photographed the Earth for nine days during April 2012 and 13 days in October 2012. In total, it took the satellite 312 orbits around the Earth to gather all the information used for the images, and now you can click through them at your leisure to find any location on Earth.

After you type in an address, you will only see a regular Google Maps views, but zoom out a bit and you’ll get the overlay. It’s not the sort of super close-up that will allow you to get a new perspective on the neighbors’ Christmas lights — the image at the top of this article is as close as we could get to New York before we lost the satellite view — but it’s still an interesting feature to be able to zoom around this image to anywhere in the world.

Looking at the Earth from space is beautiful, but zooming in on some of the more well-lit cities make the Earth start to look like space. Paris in particular resembles a distant galaxy when you get in close. 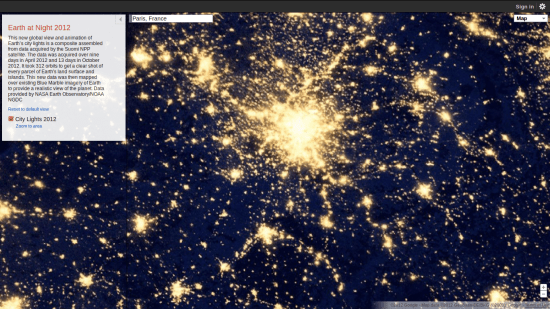