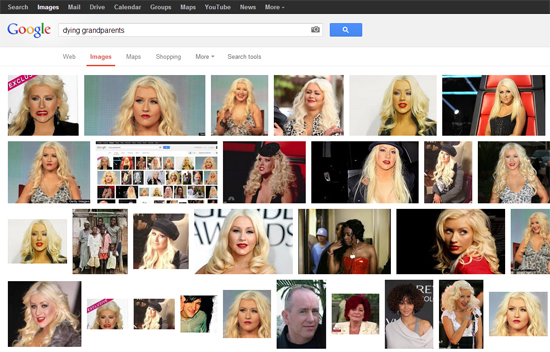 One of the fascinating things about Google‘s search algorithm is the way it associates certain words with images. For example, if you Google Image Search “completely wrong,” you’re going to end up with a bunch of Mitt Romney pictures. These tend to be associated thanks to large publications using certain words in their headlines that have certain images attached to them. It can make for some interesting results if folks didn’t get the memo. Another particularly amusing example has just cropped up: If you Google Image Search “dying grandparents,” the search engine returns a whole mess of Christina Aguilera pictures.

This traces back to a story from June about Aguilera not being a huge fan of her family. The headline, per HuffPo, was “Christina Aguilera Snubs Dying Grandparents, Says Estranged Uncle.” Now, six months later, she’s taken over the search results. Anyone that really wants a good image of an elderly person on death’s door will most likely be left scratching their head over this one.

Granted, this isn’t as amusing as the Romney-related “completely wrong” search, but it’s certainly weird. In general, it puts a warm feeling in the cockles of our heart to see stuff like this happening. Never change, Internet. Never change.

Well, okay, change a little, but please don’t quit being extremely weird. Thanks.