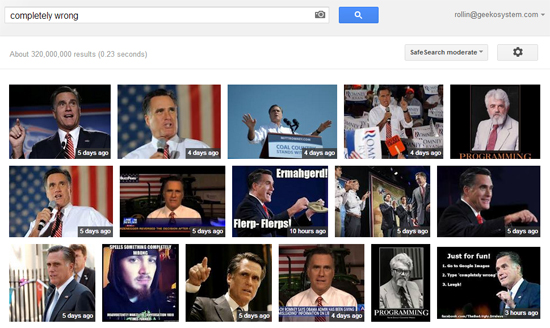 In case you didn’t already know, people were “completely wrong” about presidential candidate Mitt Romney‘s relatively recent 47% gaffe. [Romney’s apology for the debacle uses the phrase to suggest that he, perhaps, was out of line]. Unfortunately, it appears that this has also had an unintended side effect. Using Google Image Search for the phrase “completely wrong” mostly brings up photos of Mitt Romney.

Thanks to several news report titles with the term, “completely wrong,” from when Romney said his 47% comments are “completely wrong,” you can now Google Image search that term, and it will return mostly pictures of Mitt Romney. Now THAT’S poetic justice.

So, [by apologizing for his remarks], Romney is now invariably connected with “completely wrong.” Delicious.

UPDATE 10/10 3PM ET: Apologies! Read the article incorrectly. The original sentences are preserved, and the new text is presented in brackets. This goes to show just how much I actually care about politics. – Rollin

(via World of Wonder)