Golfer Who Got Bitten By Black Widow, You're Our New Spider-Woman | The Mary Sue

Golfer Who Got Bitten By Black Widow And Kept Playing, You’re Our New Spider-Woman 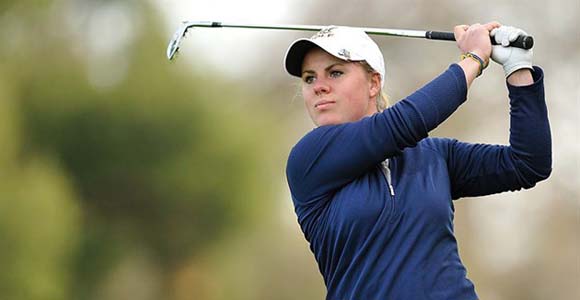 It was just another day on the course for Swedish golfer Daniela Holmqvist. Until she was bit by a Black Widow spider, that is. Did the rookie run off to seek medical attention? No, she used a golf tee to cut into her skin and remove the venom. Daniela Holmqvist, you are a superhero.

I’m not a fan of spiders to begin with so I can’t imagine what my reaction would have been if I looked down, as Holmqvist did, and saw a black spider with a red spot on its back on my body. Seconds after she did, she doubled over in pain at the fourth hole of the season-opening LPGA event in Australia.

“When I told the local caddies in my group what had happened, they got very upset and said it was a Black Widow, and immediately started looking for their phones to call the medics,” said Holmqvist to Sweden’s Svensk Golf via Golf Digest.

But instead of waiting for the medics she decided to help herself, worried the venom, which had already caused swelling and intense pain, would go further into her system. So she grabbed what was handy, a tee in this case, and dug into the skin on her leg to squeeze out some clear fluid. Medical help did eventually arrive and followed her for the remaining 14 holes.

Oh yes, she finished the course.

Unfortunately, Holmqvist shot a 74 which didn’t qualify her to continue in the LPGA. As it turns out, she was bitten by an Australian Redback spider, a relative of the North American Black Widow. Either way, she’s totally Jessica Drew in our eyes. She later tweeted, “So there is ‘the shark’ ‘pink panther’ etc am I ‘the spider woman’now?”

Yes, yes you most certainly are.