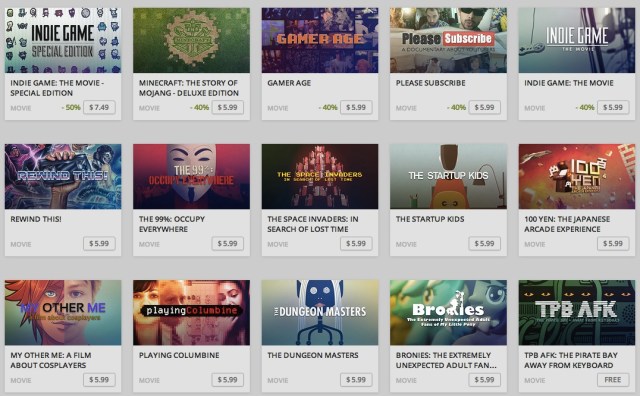 Music services like iTunes brought digital distribution into the spotlight long ago, but in the years since, concern over the ease of copying files have led to Digital Rights Management (DRM) issues and a slew of different solutions. Launched back in 2008 under the name Good Old Games, GOG.com has made a name for itself in DRM-free video games, and they just launched an initiative to bring the same freedom to movies and TV. But will Hollywood go along for the ride?

Right now, DRM is a mess. Each service—whether it’s Steam or EA’s Origin for games, iTunes or UltraViolet for movies, etc.—has its own accounts and rules you have to keep track of for using and storing your software, music, or movies. Until the past few years when Apple added the ability to re-download and stream music you’d purchased and took its music DRM-free, it was nearly impossible to restore lost iTunes music or movies even though they had all the details of what you’d bought.

Someone I know had to go through a lengthy process and argument with a customer service rep a few years back to get her library of iTunes music restored after her hard drive failed. She was told by the Apple rep that it’s not something they’re really supposed to do, and she probably wouldn’t be allowed to do it if she lost everything again. Of course, it’s understandable companies wouldn’t want you downloading your files every time you want to use them for reasons of server load and download speed, but such strict policies really make it hard to trust the idea that you actually own what you’ve put down your hard-earned cash for.

When Microsoft announced back in 2013 that the Xbox One would have strict DRM not only on digitally distributed games but also on disc-based games, the reaction by gamers was quick and severe, and the Xbox One still hasn’t really fully recovered despite walking back the policies. Many gamers also feel cheated that various games with downloadable content (DLC) actually include the content on the game disc at the time of purchase, and buying the DLC is actually just buying an extra license to use files on a disc they’ve already paid for.

And that’s the thing with DRM: If people buy something, they want to feel a sense of ownership. The point of DRM is to reduce piracy, but even those within the movie studios think it’s probably pointless, as we were told in an email from a GOG.com representative. Instead of cutting down on piracy, which it’s really only a minor hurdle for anyway, it undercuts the confidence of consumers, but GOG wants to change all of that.

Yesterday, they launched a new branch of their website specifically dedicated to DRM-free digital movie purchasing, and though they’re starting small, it looks like the bigger studios may follow. We spoke with GOG about the new service, and this is very much just the beginning.

[N]ow GOG.com is on a mission to convince the big Hollywood studios to offer their TV and cinema classics 100% DRM-free. “Our initial idea was to start with the big guys, but the process is not easy,” admits Guillaume Rambourg, GOG.com VP for North America. “In our first round of talks, the response was largely, ‘We love your ideas, but we do not want to be the first ones. We will gladly follow, but until somebody else does it first, we do not want to take the risk’.” Most studio officials agreed that DRM is pointless, but were quick to add that the lawyers would not allow them to get rid of it.”

So at this point, it’s a waiting game, as GOG took a step back and found some smaller partners who were more willing to shake things up and take the lead on the DRM-free charge, which will hopefully lead these studios to make good on their “we’re right behind you” indications. Yesterday’s movie/TV platform launch played to GOG’s strengths and was comprised of gaming documentary offerings from the production company behind the Star Craft II documentary Good Game, Nine Hour Films, and its distributor Devolver Digital, as well as the Minecraft documentarians 2 Player Productions, Dobi Media, and more.

Of course, it was predictably impossible to get anyone on-the-record about the tantalizing detail that it’s mostly the movie studio lawyers who are afraid to go DRM-free. So, we asked GOG why the studios they did wind up partnering with for the launch decided to get on board, and for Devolver Digital, which has a few offerings in the new store, it all comes back to not interfering with that sense of ownership:

In this new digital economy, many of the artists that Devolver works with believe that if they are lucky enough to have someone pay for their work, the last thing that artist (or publisher) should do is impose ownership restrictions on those who paid. Devolver started distributing indie films because we believe that the sophistication and community that exists within PC games platforms such as GOG.com can really help to elevate all the great independent filmmakers out there in the same way that they have for game developers. We are very excited to be a part of this launch and hope to place all of our 75+ independent films on GOG.com, DRM-free, eventually.

Since it seems like smaller studios and artists are more willing to buck the trend on DRM, we reached out to indie filmmaking Kickstarter wizard Gabe Diani to find out how a filmmaker without all the big studio legal hangups feels about DRM. As a Kickstarter reward on Diani and comedy partner Etta Devine’s new movie Diani and Devine Meet the Apocalypse (which met its goal and has since wrapped filming), they were giving out DRM-free copies of their previous film, The Selling.

We asked Diani what went into the decision to go DRM-free with the Kickstarter reward copy of the film, and the ownership perspective and convenience for his customers is the most important part of the decision to he and Devine, too. He responded:

Giving out DRM-free copies of our movies to the people who buy our films from our website or our Kickstarter campaigns may make it easier for people to pirate you (we’ve had pirates actually thank us) but if they’re going to do that, they’re going to do it anyway. We believe in giving our audience members as much flexibility as we can to view our film on whatever platform is most convenient for them. Part of the incentive to buy direct from us is that they get a digital copy of the movie that they own… not just a license. Is that the best business decision? We don’t know. But it makes sense from a customer service perspective.

He explained further that the technical side of the DRM debate isn’t really something which greatly concerns them. They’re more interested in getting their art out to fans by the most convenient means possible, and after the Veronica Mars Kickstarter DRM debacle, it’s probably safe to say they’re making the right call.

It’s not entirely surprising GOG bit off a little more than they could chew with going after the big studios first, but smaller artists taking a stand and working towards a change is definitely how to get the larger studios, those big bastions of the old ways, to budge on their position. If this gamble works for GOG, it could mean a big change not just for DRM for movies, but for games as well with the attention it’ll bring to GOG and to the issue.

Things are changing, we don’t want to pay for licenses to the things we buy, and soon we might not have to. If you want to support the launch offerings from GOG but you’re not sure where to begin, they’re offering two documentaries for free to get you started: one fittingly about piracy site The Pirate Bay in TPB AFK: The Pirate Bay Away From Keyboard, and The Art of Playing about how indie developers affect the direction of gaming as a whole.

Previously in GOG and gaming