Goats Form Accents Based on the Hip Goats They Hang Around 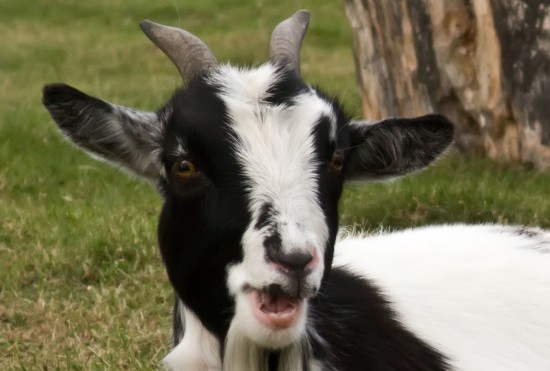 Conventional scientific wisdom has held that most mammals make vocalizations based on one thing, and one thing only: Genetics. Unless the creature uses its voice to communicate or navigate — as is the case with bats, whales, and good ol’ Homo sapiens — a mammal will sound the same no matter where it comes from. A U.K. sheep will be the same as a Utah sheep, and so on. However, a new study looking at (adorable) pygmy goat kids suggests that this might not be the case, and that the voices of mammals are far more flexible then we thought.

In a study headed by Dr. Elodie Briefer at the Queen Mary University of London, researchers recorded the vocalizations of pygmy goat kids at various stages of their lives. The first recordings were taken when the goats were a week old, and spending most of their time only with other goats to which they were directly related. The next round of recordings was made when the goats were about five weeks old, and — like all growing adolescents — starting to spend more of their time in new social groups called crèches.

Their findings, published in the journal of Animal Behaviour, suggest that goats modified their calls as they aged, and changed them to match the goats they spent most of their time with. Think of it like a child who grows up in Texas and then moves to the East Coast, her accent changing over time to match what she hears the most.

According to Dr. Briefer, the discovery could shed new light on the mammalian brain and how animals form social bonds.

“We found that genetically related kids produced similar calls, which is not that surprising. But the calls of kids raised in the same social groups were also similar to each other, and became more similar as the kids grew older. This suggests that goat kids modify their calls according their social surroundings, developing similar ‘accents’.”

This revelatory study on the social and speaking habits of goats comes along with earlier news about ravens using gestures to communicate, and parrots naming their young. All of these studies have increased our understanding of the creatures humans interact with on a day to day basis, and have perhaps been ignored for not being particularly exotic. So the next time you happen to be hanging around some goats, you’d do well to mimic them if you want them to think you’re cool.

(Queen Mary University of London via Geeks are Sexy, image via Tony Austin)