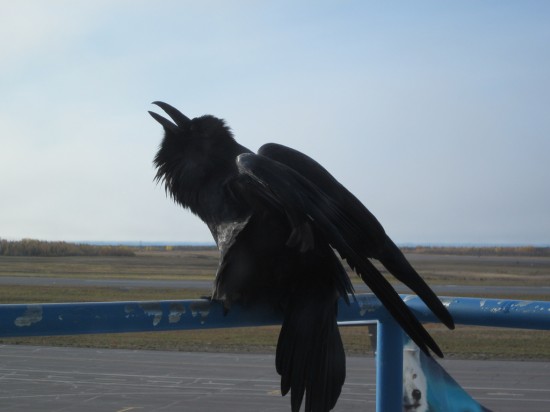 Ravens have proven to be some of the most surprising species of birds, having demonstrated the ability to use tools and even solve complex puzzles. Now, new research from Simone Pika and Thomas Bugnyar suggests that these clever birds might use gestures in order to communicate with each other.

In their study the researchers observed seven ravens (Corvus corax) in the Norhtern Alps over the course of three field seasons. Over that time, they observed 38 instances where one raven would pick up a non-food item, like moss or a stick with its beak, and present it to another raven seemingly to grab that raven’s attention. The researchers believe this behavior is an attempt to establish some kind of relationship between the two birds, as it was only attempted by a bird when the other was watching.

This could be a major discovery, as communicating through gestures is thought to be foundational to language and only observed in humans and closely related great apes. In their study, which was been published in Nature Communications, the researchers compare this behavior to the development of human children:

Around the age of one year, human children start to use gestures to coordinate attention towards a social partner and an object of mutual interest.

The comparison being that like humans, the birds want to be social and initiate that social behavior by drawing a bird’s attention to something. Given the social nature of ravens, this would seem to make sense.

However, issues of non-human language are particularly difficult to parse. What might look like an attempt at communication to a human could simply be an unrelated behavior that humans do not understand. As such, the study has already drawn some criticism, as noted by New Scientist:

Rachel Shaw of the University of Cambridge says that the conclusions, although fascinating, should be viewed with caution. Although it might look like the birds are attempting to redirect the attention of another bird, the behaviour might simply be a mating or nesting ritual triggered by a peak in hormones, she says.

This seems possible, especially since the researchers note that this kind of gesture behavior was observed to be especially prevalent between birds of the opposite gender.

Further research will likely be needed to see if other birds display the same behavior, and how the apparent gesturing relates to other social behaviors of ravens. Also, did you know that ravens can talk and that it sounds really creepy? Because they totally can and it totally does.