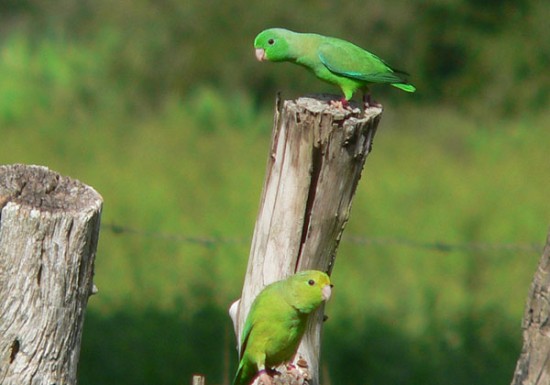 Parrots, with their amazing abilities to mimic speech and talk to humans in addition to each other, are by far impressive communicators. But research shows that parrot conversations are even more complex. Each parrot has its own signature call that others use to address it, which is the parrot equivalent of having a name. But where do these “names” come from? New research has shown that just like with human babies, parrot parents name their offspring, even before the babies can communicate themselves.

The research, led by Karl Berg of Cornell University, used video cameras to record the communication process of green-rumped parrots (Forpus passerinus) in Venezuela. The wild parrot study showed that even before chicks begin to chirp back at their parents, adults give them a signature sound by which they are addressed. The babies will take this sound and in some cases tweak it before using it throughout their life.

Scientists have known for some time that parrots use these signature calls to refer to each other. Observing the process in captive birds led researchers to wonder how wild parrots dealt with naming, because it could show how names are given. The researchers felt there were two possibilities for how parrots get their names: it could be biologically innate (each bird names itself) or assigned by another older bird, which turned out to be the case.

For the study, the researchers placed video cameras in 16 green-rumped parrot nests in Venezula. These birds are part of a large wild population that has been living in nesting tubes rigged up by scientists in 1987. The researchers then moved around the parrot eggs so that half of the colony were raising babies that weren’t theirs genetically. Recordings of the calls made by the parents before the chicks were able to chirp , and of the calls once the chicks were individually vocal showed that parents started making the calls when the birds were very young. Additionally, the recordings showed that the parent’s calls provided a basis on which the baby would imitate and tweak their own name. The names bore more similarity to the parents that raised the offspring, than the biological parents, suggesting that the calls are in fact learned by the chicks rather than innate.

Parrots are not the only animals known to have names. In addition to humans, dolphins also use specific names for each individual. Researchers believe that the sophisticated social lives of these animals may be what drives the need to have names. For parrots, having a name is a valuable tool for knowing who is who when flocks change or shift members.

This discovery shows interesting corollaries between human communication and parrot communication that may be useful for subsequent studies of speech development. The study was published in Proceedings of the Royal Society B.