Gliese 581g: An Earth-Like Planet Has Been Discovered that Could Sustain Life 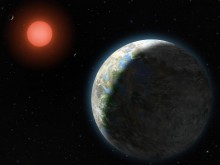 An Earth-like planet has been discovered just 20 light-years away in the Gliese 581 system following an eleven-year observation, and NASA says that this could be “the most Earth-like exoplanet yet discovered and the first strong case for a potentially habitable one.” Dubbed Gliese 581g, it is the fourth planet from the red dwarf star Gliese 581, and has a mass of three to four times Earth’s, orbits its star in just 37 days, and is “tidally locked” to the star, meaning that one side is always facing the star and it’s always light on that side, while one side is always facing away and it’s always dark.

Sci-fi sounding details aside, the reason Gliese 581g has scientists so excited can be summed up in one words: Water.

Scientists don’t yet know if Gliese 581g has liquid water on its surface — a key ingredient for life — but they’re hopeful. It’s large enough to hold onto an atmosphere, which could trap water, and it’s within just the right distance of its sun. It falls squarely within Gliese 581’s ‘habitable zone’: If it was too much closer, it would be too hot, and if it was too much further, it would be too cold.

The diagram below (click to view it larger) shows the relative positions of planets in the Gliese 581 system versus ours. 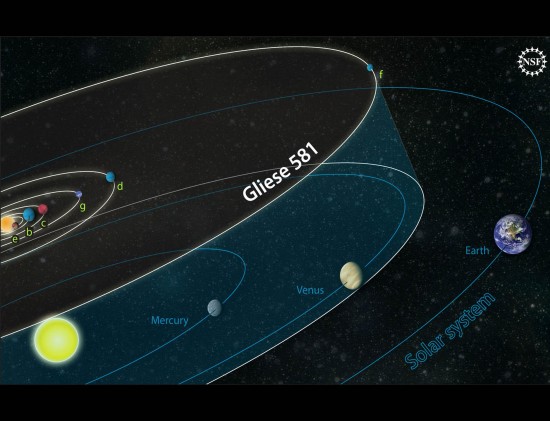 Life is not, however, a sure thing. Steven Vogt, a professor of astronomy and astrophysics at UC Santa Cruz and one of the two lead scientists behind the discovery, raised eyebrows in science-minded online communities like Slashdot and Reddit when he told Discover that “personally, given the ubiquity and propensity of life to flourish wherever it can, I would say that the chances for life on this planet are 100 percent. I have almost no doubt about it” and that “the question wouldn’t be to defend that there is life at Gliese 581g … ‘the question,’ he said, ‘would be to demonstrate that there isn’t.'” Given that the presence of liquid water on the planet’s surface hasn’t even been ascertained yet, this is a pretty unscientific statement, to say the least. Vogt later clarified to the New York Times that he meant this “strictly personally.”

(via Discover, NASA. TItle pic and diagram via NASA)