Scientists May Have Spotted a Tiny, Magma-Covered Exoplanet 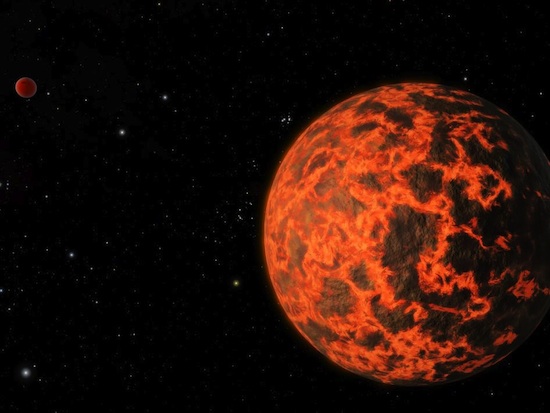 While observing the exoplanet GJ 436b orbiting its red-dwarf star, astronomers noticed something odd: Periodic fluctuations in light from the star indicating that there was perhaps another planet. One smaller than Earth, and possibly covered in glowing, molten rock. Who’s up for a trip to Magma World?

Sadly, however, NASA scientists have opted to christen the as-yet confirmed planet UCF-1.01. Not nearly as snappy as Magma World, but there’s no accounting for taste. A paper announcing the discovery of UCF-1.01 using data from the Spitzer space telescope has been accepted by The Astrophysical Journal, and has University of Central Florida’s Kevin Stevenson as lead author. The planet was spotted by watching for fluctuations in the light from its star as UCF-1.01 passed between Earth and the red-dwarf.

The planet is about two-thirds the size of Earth, or about 5,200 miles in diameter, making it one of only a very few exoplanets believed to be smaller than our own world. It’s about 33 light-years away from us, closer than any other exoplanet smaller than Earth. However, UCF-1.01 is no paradise: It’s so close to its star that a year lasts only 1.4 Earth days and the surface temperature is around 1,000º F. Hence the magma.

NASA’s press release goes on to describe the brutal conditions of the planet:

If the roasted, diminutive planet candidate ever had an atmosphere, it almost surely has evaporated. UCF-1.01 might therefore resemble a cratered, mostly geologically dead world like Mercury. Paper co-author Joseph Harrington, also of the University of Central Florida and principal investigator of the research, suggested another possibility; that the extreme heat of orbiting so close to GJ 436 has melted the exoplanet’s surface.

“The planet could even be covered in magma,” Harrington said.

You may have noticed all the uncertainty about whether or not UCF-1.01 exists. While the paper’s authors seem confident that what they’re looking at is a planet, UCF-1.01 is so small that we simply do not have the technology to confirm its mass. Without this critical piece of information, it will have to remain in “candidate exoplanet” status. What’s more, the team saw evidence of a possible third planet, called UCF-1.02, which is also irritatingly and unconfirmably small.

While it could be a long time before we’re able to add UCF-1.01 and its sibling to the growing list of exoplanets, its discovery (such as it is) is a remarkable achievement. For now, scientists will keep drawing a map of the worlds beyond our own, waiting until we can actually travel their ourselves.

(images and story via NASA)