Ginger Seal Having a Great Life at Zoo | The Mary Sue 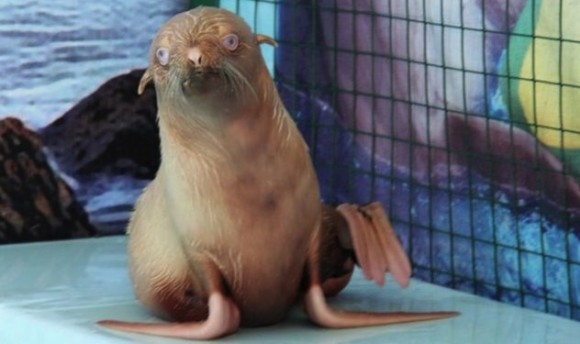 Guys, guys: We have news about the ginger seal who was shunned by her pod! And it’s good news! After being captured on heartbreaking film by photographer Anatoly Strakhov, the abandoned baby seal — now named Nafanya, after a Soviet cartoon character, to whom she bears a slight resemblance — now has a comfy, nurturing home at the Akvatoria dolphinarium. And unsurprisingly, she is a big hit with the crowds! Awww, it makes you want to hug the Earth!

In case you forgot, Nafanya was abandoned as a seal pup by the rest of her pod because of her different coloring. But after being photographed by Strakhov, she was taken in by the dolphinarium and given a home. At the time, she was thought to be nearly blind, but her vision is better than zookeepers originally thought. Her vision is only impaired in bright sunlight, which makes us think about a baby ginger seal wearing sunglasses, and that is a wonderful picture to have in one’s brain on a Monday morning.

While she is being cared for and enjoying the attention by many, many visitors at the dolphinarium, Nafanya is not yet hanging out with other seals and is on a one-month “quarantine,” which is customary for new seal recruits. But after that, she will swim, play, and skip about with other new seal friends!

But here is the even more fun part: Nafanya has her own web cam! You can visit it at the dolphinarium’s site, which is here. She makes appearances between noon and 6:00 PM EST (7:00 AM and 1:00 PM in the UK).

Still no word on what could be a totally Pixar-worthy movie featuring the ginger seal and the bald penguin, Bald Penguin and Ginger Seal: An Iceberg Made From Tears.

Previously in Animals in Peril