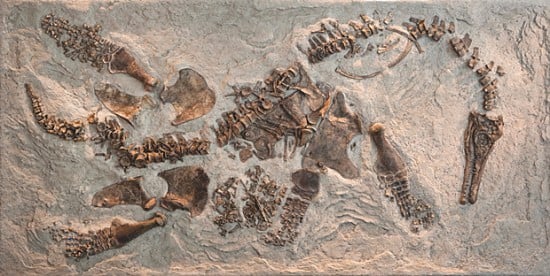 For nearly 25 years a spectacular fossil that could answer scientists’ questions about an ancient marine reptile lay buried in the basement of the Natural History Museum of Los Angeles County. The fossil was of a plesiosaur, a large four-flippered creature that roamed the oceans some 78 million years ago. But it wasn’t just any fossil, this fossil was pregnant.

The fossil shows the mother, around 470 cm long, carrying a single fetus, around 150 cm long. The fetus has 20 vertebrae, shoulders, hips and paddle bones, and is believed to be about two-thirds grown. This is the first case of a pregnant plesiosaur fossil, and it shows that the creatures gave birth to live babies rather than hatching eggs. The finding also suggests that the creatures cared for their young similar to modern day whales and dolphins.

The fossil is of a species called Polycotylus latippinus. Unlike some ancient marine reptiles, which would give birth to many small babies, the Polycotylus fossil shows that its reproduction was more like the extinct ichthyosaurs, mosasaurs, and choristoderans which all gave birth to live young.

The analysis of the fossil was led by Robin O’Keefe from Marshall University and Luis Chiappe from the Natural History Museum of Los Angeles County. O’Keefe told Nature News:

“We have known about plesiosaurs for almost 200 years, but despite an excellent fossil record we have never found a pregnant plesiosaur before.”

According to O’Keefe, because the fossil shows that the plesiosaur would have given birth to a single baby, it is likely that the creatures had some sort of social dynamic where they would care for their young. There is a precident for large animals that give birth to a single child to care for it the way humans, elephants, whales, or dolphins do. Also, the fossil shows that the baby was not fully developed with some unfused bones that would have made it vulnerable and unlikely to be able to care for itself at birth. This suggests some sort of social group where mother and baby could have received protection. O’Keefe says:

“If you are going to put all your egg in one basket by having a single large baby, it makes a lot of sense that you would want to take care of that baby.”

However, this is the first fossil ever found of a pregnant plesiosaur. Sweeping conclusions can not and have not been made about the creatures social life. More fossils would be needed to determine if the plesiosaur had a different social and reproductive life than other extinct marine reptiles.

The fossil was discovered in Kansas in 1987 by a private fossil hunter and donated to the museum, where it sat without being analyzed or prepared for show. Last year the museum decided to dust off the fossil, and obtained the necessary funding for its preparation and display. For those interested in checking out a bit of history, the museum’s new dinosaur hall now has the fossil, nicknamed Poly, on display. The research was published in the journal Science.