Ghost Shark Sneak Peek Leaves Us With Even More Questions About Ghosts, Sharks

You're not even trying anymore, are you Syfy? 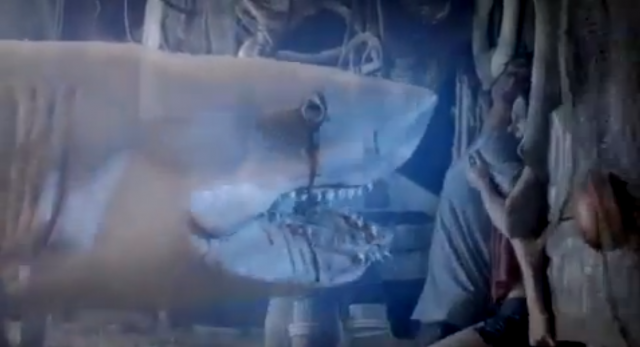 Movies this summer seem to be written using Mad Libs. Specifically, shark-themed Mad Libs, because after Sharknado, the Megalodon “documentary,” and the shark that ate another shark, TV execs have decided the world just isn’t terrified enough of going in the ocean. The latest? Ghost Shark— and if you can’t wait until tonight, here’s a sneak peek.

After one teenager disappeared from a beach party, only her arm ever making it back to shore like the grotesque campfire stories that haven’t scared anyone since before they hit puberty, a drunken sea captain killed the shark everyone believed was responsible. Because if you’re going shark-hunting, a bit of liquid courage is a really good idea.

It turns out, the girl wasn’t actually killed by a shark, so naturally, the ghost of that shark– which can leave the ocean and hunt on land, because I guess that’s how ghost sharks work– is tracking down that sea captain. Probably for tarnishing the good name of sharks everywhere. Our sea captain goes to a ghost hunter, which, actually, seems like the only thing he could have done, aside from maybe a psychiatrist for some anti-psychotics. The dynamic duo avoid the (I can’t believe I’m writing this) ghost shark while uncovering your standard sex-and-murder-rich-people-scandal. And I’m guessing there are some ghost-shark-related-deaths along the way.

So, once they clear the shark’s name, will it stop killing people? And how exactly does a ghost shark kill, anyway? Can it still eat? Does it only go after people terrible enough to throw their “friends” in its path as they try to escape via jetski? Who is that boy sitting around looking vaguely troubled and watching the ocean? Is he the drunken sea captain, despite looking too young to legally drink? This movie has a lot of questions to answer.

Get ready for tonight with the clip below: