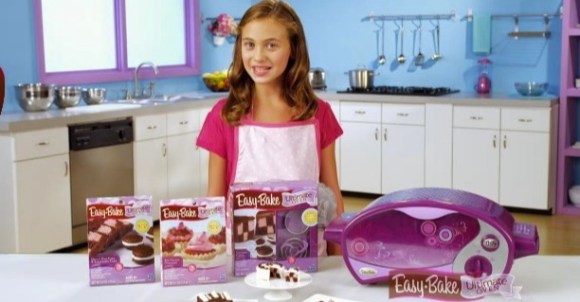 New Jersey eighth grader McKenna Pope has a four-year-old brother, Gavyn, who wants to a be chef when he grows up. For Christmas, in the boy’s own words, he wants “a dinosaur and an Easy-Bake Oven.” As anyone who’s ever seen or had one knows, the Easy-Bake Oven is marketed pretty much exclusively to girls, with a pink and purple design and commercials featuring young girls making baked goods decorated with hearts and pink frosting. (On Hasbro’s Website the Easy-Bake Oven is in the “Cooking & Baking Games for Girls” section. There’s no equivalent section for boys.)

Miffed by the suggestion that cooking is somehow not a sufficiently “manly” interest for young boys, Pope started a Change.org petition to get Hasbro to include boys on its packaging and to offer the Easy-Bake Oven in gender-neutral colors like red, blue, and green.

Writes Pope in the petition (which also features an adorable video of Gavyn getting his bake on by mixing cookie dough), the Easy-Bake Oven being aimed toward girls “sends a clear message: women cook, men work.”

“I have always been adamantly against anything that promotes specific roles in society for men and women, and having grown up with toys produced by the Hasbro corporation, it truly saddens me that such a successful business would resort to conforming to society’s views on what boys do and what girls do.

I want my brother to know that it’s not “wrong” for him to want to be a chef, that it’s okay to go against what society believes to be appropriate. There are, as a matter of fact, a multitude of very talented and successful male culinary geniuses, i.e. Emeril, Gordon Ramsey, etc. Unfortunately, Hasbro has made going against the societal norm that girls are the ones in the kitchen even more difficult.”

The petition, which went up last Thursday, currently has nearly 18,000 signatures. There’s been no response from Hasbro yet, which after the frankly weird way they handled a six-year-old writing them about gender inequality in Guess Who? a few weeks ago doesn’t surprise me. Your PR department needs to get it together, Hasbro. I mean, it’s the holiday season, your execs are probably swimming in swimming pools full of money anyway. But even if you’re not going to offer more gender-neutral products (which, of course, you should), at least put in an effort to make yourself not look all Grinch-y. Give us some indication that you realize the way you’re promoting gender stereotypes is problematic.

And then, y’know, do something to fix that. Hey, I can dream, can’t I?

(via: The Daily Beast)