Six-Year-Old Girl (Board) Gamer Calls out Guess Who? on Its Gender Inequality; Hasbro’s Response is Both Hilarious and Awful 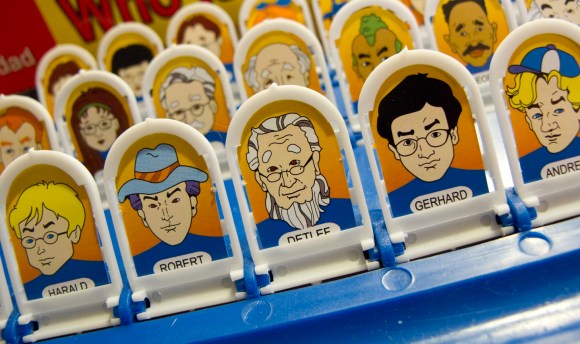 I never played Guess Who? all that much as a child, which might explain why I never realized how imbalanced it is in terms of gender. Or maybe I just wasn’t as perceptive as this six-year-old girl, who not only noticed that there are only five girls compared to 19 boys, but also took the time to write to Hasbro about it. Reads her letter:

My name is R______. I am six years old. I think it’s not fair to only have 5 girls in Guess Who? and 19 boys. It is not only boys who are important, girls are important too. If grown ups get into thinking that girls are not important they won’t give little girls much care.

Also if girls want to be a girl in Guess Who? they’ll always lose against a boy, and it will be harder for them to win. I am cross about that and if you don’t fix it soon, my mum could throw Guess Who? out.

My mum typed this message but I told her what to say.

And that would be the whole thing if it weren’t for Hasbro’s somewhat dickish response to the six-year-old, which cites the game’s basis in “numerical equation” as the reason gender isn’t a relevant factor. “The game is not weighted in favor of any particular gender, male or female,” writes Hasbro. “Another aspect of the game is to draw attention away from using gender or ethnicity as the focal point, and to concentrate on those things that we all have in common, rather than focus on our differences.”

Correct me if I’m wrong, but isn’t identifying physical differences the whole point of Guess Who? Unless I’ve completely forgotten how to play the game, “Are you male [or female, either/or]?” is one of the first questions you ask—and if you happen to be playing one of the game’s five ladies then you’ve given your opponent a distinct tactical advantage. OK, maybe that terminology’s a bit over-serious (my low-level military history obsession has been acting up lately, so sue me), but way to not answer that little girl’s question in a way that makes any sense, Hasbro.

Luckily the girl’s mother called the toy company out on their nonsense, noting in a letter of her own that:

Unfortunately, she is now no clearer as to why there are only five female characters for her to choose from in her favourite board game, compared to the 19 male characters her brother can pick. (Obviously, she could choose to be a male character, but as you know, that’s not usually how children work).

If anything, your response has left her more confused than before. She is a smart girl, but she is only 6 and still in senior infants at primary school, so she is a long way from being able to grasp concepts like numerical equations and weighting.

As a company that makes toys for children, I would have anticipated you would communicate with your youngest customers in a more direct and child-friendly way.

But I must confess that, despite being 37 years of age and educated to Masters level, I am equally at a loss.

Why is female gender regarded as a “characteristic”, while male gender is not?

You just got burned, Hasbro. The toy company responded, noting their agreement that girls are equal to boys and that they would consider adding more female characters to the game in the future.

I’m vacillating between being frustrated and amused by this, but I’m making a conscious decision to favor the latter for blood pressure reasons. How is Hasbro so bad at interacting with kids?!

Also: That is one amazing six year old. Video game companies had better watch out—give her a few years and she’ll be calling out your games on their sexism. Unless you clean it up before then. You still have time. Don’t waste it.