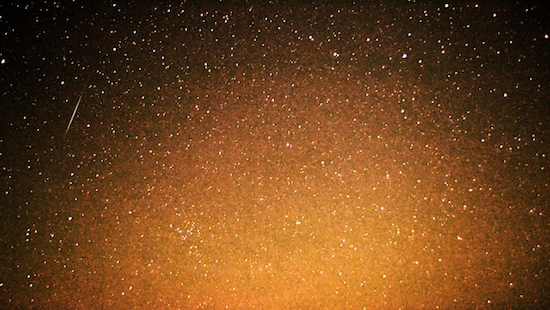 Christmas may not be here for another few weeks, but for astronomy buffs everywhere, today might as well be it. Tonight marks the annual Geminid meteor shower –– named for the Gemini constellation it is conjectured to emanate from — which will be peaking and boasting an estimated 100 meteors or more per hour. This isn’t the only show that will be lighting up the skies tonight. Astronomers predict that the Geminids will be prefaced by a new, unnamed meteor shower. Granted, it won’t be as spectacular as the shower to follow, but it’s nevertheless managed to pique the collective interest of stargazers.

According to Bill Cooke, head of NASA’s Meteoroid Environment Office, the likelihood of this unnamed shower streaking across the sky is predicated entirely on Earth passing through the debris stream of the comet Wirtanen. Past analysis shows that our planet has never made contact with this stream, but based on computer models, this can possibly happen. If the event does occur, this meteor shower will be named the Piscids since their point of emanation is near the constellation Pisces, in a similar fashion to the Geminids earning their novel moniker. The Piscids — granted they do appear — are estimated to produce 30 meteors per hour.

The meteor shower is expected to begin partially after sunset, but the frequency of the meteors will increase by 10 p.m., ultimately peaking at roughly 2 a.m. Those living in the countryside away from the bright lights of the city will be able to see this cosmic spectacle at its fullest, leaving us city slickers with nothing much to gawk at — unless you know a way to temporarily shut down the power grid without getting arrested.

Fortunately, there are easier, and less felonious, alternatives. Cooke and members of NASA will be hosting a live web chat from 11 p.m. to 3 a.m. at the Marshall Space Flight Center in Huntsville, Alabama, including live footage of the meteor shower in progress. The second option, if time allows, is to drive out into the country before December 16th, when the shower is expected to dissipate. As long as you’re not seeing it from the barred window of a prison cell, you’re pretty much golden.

(via Space.com, image via Tydence)