In which we talk a lot about fashion. 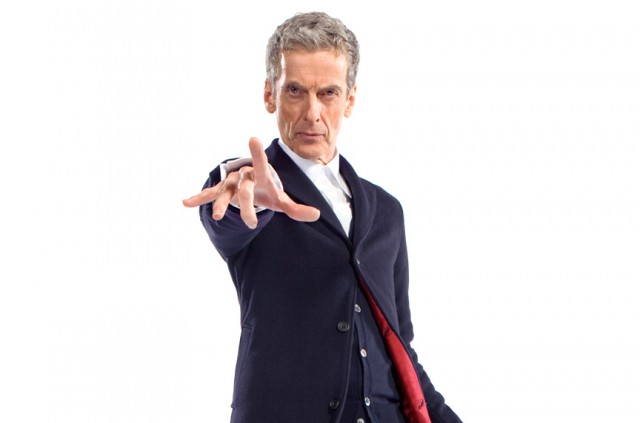 Glen isn’t around this week, so Victoria, Dan, and Carolyn step up and carry on without him. Not surprisingly, Doctor Who comes up as a topic and there’s a lot of talk about Peter Capaldi’s outfit. Give it a listen right here, or check us out on iTunes.

Victoria thinks that the new outfit makes Twelve look sort of like Tuxedo Mask because everything in her life obviously revolves around Sailor Moon, so she made a thing. Gaze on the work, ye mighty, and despair. 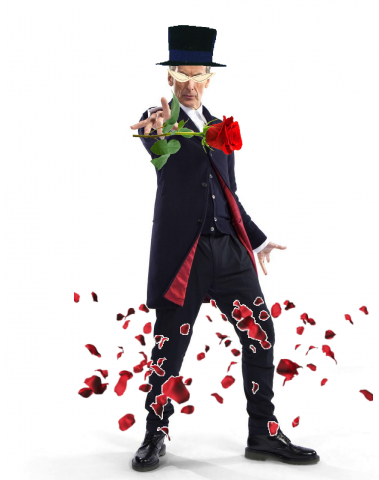 Besides Doctor Who, the team talks about the sad fate of different space rovers. Dan’s really concerned about the rovers, everyone.

Dan’s also really excited about the fact that the velociraptor cage from the opening scene of Jurassic Park is up for sale for $99,900. It even comes with its own fake raptor.

There’s also some news about a gun-toting raptor used to help sell guns at a gun show, and the Army’s plan to use robotic soldiers because they never saw Terminator.

Our old friend The Robot Butt gets referenced briefly, and Carolyn keeps hearing the word “robutt.”

As for your Editors’ Picks this week, Victoria takes Glen’s absence as an opportunity to make a double pick. She thinks you should be playing The Legend of Zelda: A Link Between Worlds.

This is what she had to say:

I have two picks because we missed a podcast and also because I just have a lot of feelings about things. First up we have Legend of Zelda: Link Between Worlds, which is officially the first Zelda game that I’ve played for this long and which is also adorable as hell. The 3D is integrated very well, the puzzles have a really great learning curve (still challenging, but I’ve only been horrifically stumped once or twice) and the “flatten Link into a painting pancake to run around walls” function is really, really cool.

And also HabitRPG which gameifies your life, and rewards you with experience points for real-life things like, in Victoria’s case, drinking water.

My other pick is HabitRPG, which is a website that helps you be a responsible adult by giving you experience points and imaginary gold every time you check something off your to-do list. Basically, it turns your life into an RPG. You get to pick a class, buy fake armor with your fake gold that you earned doing real stuff that you’re supposed to do, and then you get together with a bunch of your friends in a “party” and go on quests and then get more gold and hopefully eventually you come out of it being the type of person who makes their bed without being prompted. It’s a fun time.

Carolyn is into the new Comedy Central show Broad City, which is hilarious. Carolyn says:

I had two picks this week, because the week was just that great!

The first is just to remind you to watch Broad City already! Abbi Jacobson and Ilana Glazer star as themselves in this Amy Poehler produced show. The Wall Street Journal called it “sneak attack feminism” but it’s also hilarious and you get to see Fred Armisen in a diaper. Plus it’s available to watch on Hulu, so what are you waiting for already?

Most Trees Are Blue

My second pick is Jaden Smith’s Twitter account, it’s equally as funny as Broad City but with less self-awareness. Will Smith’s son is offering up what he describes “as juvenile philosophy and poetry” in order to raise the huamn consciousness, and it’s a great reminder of how lucky I was not to have twitter at my disposal during adolescence. My favorite of the misspelt musings is probably If A Book Store Never Runs Out Of A Certain Book, Dose That Mean That Nobody Reads It, Or Everybody Reads It. It’s a great question but guys, once again, I’m so lucky I didn’t have a twitter account at his age.

Dan is on board with Final Fantasy Tactics War of the Lions, which is a port of the classic Playstation game.

You can get FF Tactics: WotL on Android, iOS, and PSP, but I’m specifically recommending the Android/iOS versions here. I was a bit off about the game’s price on the show (it looks like the game is $13.99), but you’re still getting a lot of game for the money. Maybe I had it in my head that it was so cheap because I had absolutely no reservations about parting with the money. It’s a port of the original Final Fantasy Tactics, which is one of my favorite games of the PS1 era by far.

It’s got huge depth in character customization, a really deep plot about warring factions in a fantasy setting, and a perma-death system that made me feel really close to my characters. It’s more expensive than a lot of iOS games, but if you’re looking for something deeper than those games without having to shell out the money for a whole portable system, this game is a solid choice.

As always, our theme song is “A Theme For Harold” by Kevin MacLeod. Be sure to rate and review us on iTunes, and say something nice to somebody today.