Blue Force Gear Wants Velociraptors To Fight For Our Freedom

Sadly, a velociraptor may have been the least threatening thing at Shot Show 2014 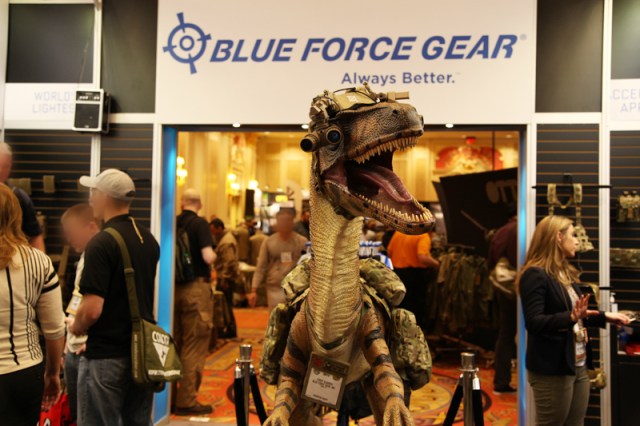 If you needed another reason to be baffled by America’s military complex and confused by gun culture, this year “Shot Show,” the country’s largest annual gun convention, featured an appearance by a velociraptor named Terry Clausen.

Being a clueless Canadian, I had to google what “Shot Show” is, and, oh boy, did the internet ever tell me. Bearingarms.com describes the annual gathering of 68,000 gun and weaponry enthusiasts as a place where “the only gun control debate was whether you can fit one or two fingers on the new Beretta Pico without the magazine extension,” and the average reporter “owns more firearms than pairs of socks.”

According to TheFirearmBlog.com, companies at Shot Show usually employ “Booth Babes” to  entice visitors to look at products (and by babes I’m assuming they mean women and not infants packing heat.) But at this year’s Shot Show in Las Vegas, army-supply company Blue Force Gear tried something a little unusual to great success-replacing hot women (or armed babies) with “Tactical Dinosaurs” — in this case, Terry the Velociraptor. 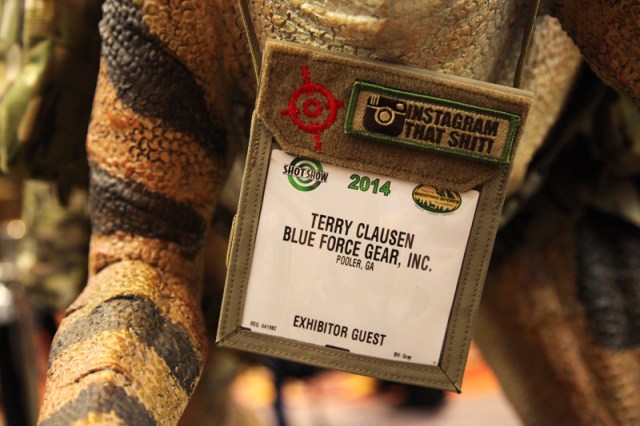 The company had this to say on Terry’s website about their publicity stunt:

First thing you may ask – why?  We say “Why not?”  While the world delves deeper into high tech weaponry, we went low tech.  How does one stop a cold, calculating raptor running around wreaking utter havoc on the enemies of freedom?

Velociraptors are vicious creatures.   With the advances of genetic cloning, we discovered they are indeed just like Jurassic Park portrayed them – smart, ruthless, and awesome.  They have a very high size to carnage ratio and for those paying attention, they are the green solution to warfare.

The Tactical Dino is equipped with the world’s most advanced load carriage solution.  The ultralight, raptor-tough gear carries the necessary navigation and telemetric equipment in a low bulk, fluid setup that does not hinder slashing, gnawing, and mauling. 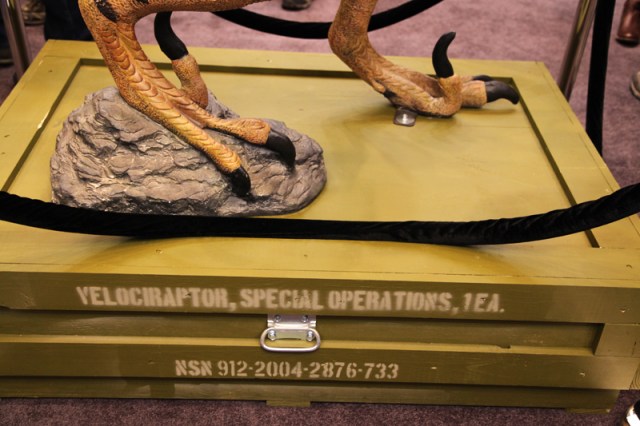 So, just to clarify, Blue Force has not quietly used “the advances of genetic cloning” to create an army of dinos to “wreak havoc on the enemies of freedom,” but they did manage to gain a lot of attention. The NRA even tweeted about Terry. That would be the exact opposite of success in my books, but then again, I don’t even know what a Beretta is.

Our mission is to design and produce gear that enables the modern warfighter to lose ounces and gain seconds – sometimes the difference between life and death.

We guess if you replace “be Always Better” with “have more dinosaurs,” then they’re definitely  staying true to their values.

And if you’re a squeamish Canadian (or an American who owns more socks than guns), don’t worry! Raptors don’t kill people, people do. Or… well, actually, raptors would absolutely kill people.

But hey, obviously gun and weapon control is controversial. If you’re getting up in arms about your right to bear arms, just relax and watch this video of an absurd prank as a reminder of something we can all agree on –Japanese TV is insane.

(via io9, images via Tactical Dino)