Chinese Lunar Rover Stalling, Might Die Alone on the Moon

Noooo, rabbit! You have science to do up there! 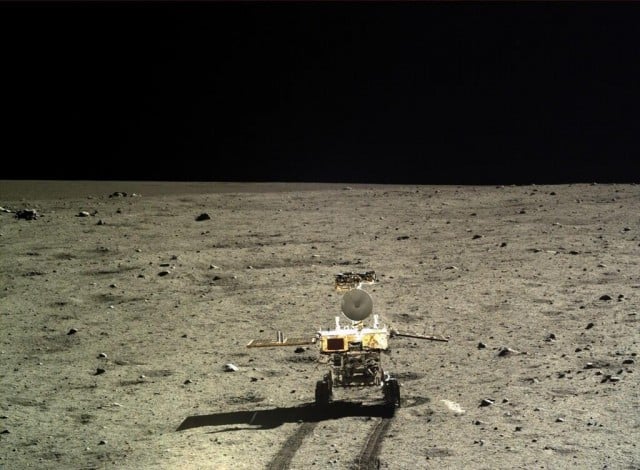 Bad news for people who like space robots: China’s first lunar rover, Yutu or “Jade Rabbit,” experienced some kind of malfunction on Saturday and hasn’t yet recovered. In fact, it’s very likely that it will freeze over sometime in the next two weeks, thus ending its three month mission tragically early. We’re very sad, guys.

According to Xinhua News Agency and the State Administration of Science, Technology and Industry for National Defense, the rover was scheduled to enter a two-week dormant period during the lunar night, during which time there would be no solar power for it to charge itself. However, due to a “mechanical control abnormality,” the electrical motors that are supposed to close the rover’s solar panels aren’t working, leaving the rover completely stranded. That’s a huge bummer, considering that this is the first time a country other than the U.S. or the Soviet Union has attempted to land on the Moon, as well as the first “soft” Moon landing since 1976.

It would be very easy to make some awful jokes about how this represents quality of China’s space program, but we’re not going to do that — mostly those kinds of jokes are usually just a liiiittle bit racist, but also because it’s very hard to put things up in space successfully regardless of how technologically advanced you might consider yourselves. I mean, hey, remember about twenty years ago when we programmed a rover with both metric and imperial measurements and it got so confused that it launched itself into the sun? Our track record as a space-navigating nation is not so great, either.

Instead, we’re going to focus on that poor rover, because we here at Geekosystem are weirdos who identify way too strongly with emotionless, inanimate objects that live in space. Jade Rabbit is up there all alone slowly freezing to death, you guys. And that was the plan all along! Can’t somebody go up there and bring it a blanket, or a book of matches? Something?

Users of the popular Chinese microblogging platform Sina Weibo definitely agree with us, as they’ve started a hashtag that reads “hang in there Jade Rabbit.” Our sentiments exactly. Hold on, little buddy!

(via The Verge, image via CSNA)