A Pronunciation Guide for 21 Key Geeky Words and Phrases 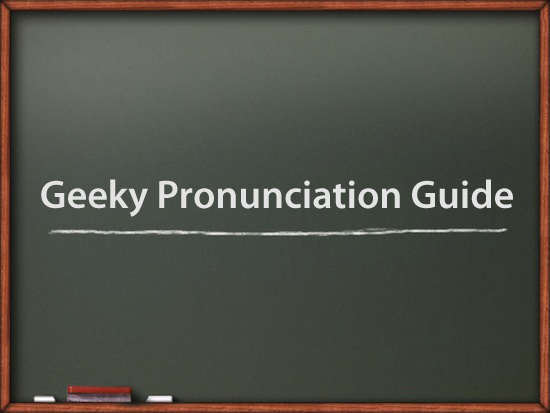 Geeks take pride in knowing every facet of their area of expertise, whether it’s knowing that the murderous Marvel antihero The Punisher once teamed up with the lovable Archie, being able to recount all 86 endings of Star Ocean: The Second Story, or knowing what a grue’s favorite diet is.

With a history dating back to 1995, every gamer knows GameFAQs. It’s the number one site for video game tips, tricks and guides, and has a humongous, generally helpful community that resides on its forums. Whenever anything related to gaming is in question, heading over to GameFAQs usually solves the issue. The pronunciation issue isn’t isolated to the helpful site though, it’s focused on the FAQs bit.

Having a history tracing back to 1986, Ubisoft is now one of the world’s largest video game publishers, best known for franchises like Prince of Persia, Assassin’s Creed, Myst, Rayman, Beyond Good & Evil, Heroes of Might and Magic, and various Tom Clancy games.

Starting out as two separate Japanese RPG powerhouses, Squaresoft and Enix merged their final fantasies and dragon quests to form an even more powerful (not counting Final Fantasy XIII, naturally) JRPG powerhouse, Square Enix. The issue isn’t with the “Square” part of the name, but with it’s JRPG brethren, Enix.

Created by H.P. Lovecraft, Cthulhu is a humongous cosmic entity resembling a blend of an octopus, dragon and humanoid. Bordering on a ridiculous mishmash that would be found laughable in today’s horror scene, Cthulhu is still widely-known and loved amongst literature buffs and geeks the world over.

Coined in 1976 by Richard Dawkins, who you may otherwise know as “that atheist on South Park who had sex with Mr. Garrison after his sex change,” a meme is essentially a unit of culture. Within the past few years, Internet memes reached critical mass and the word became a widely-acknowledged piece of common language.

ICO is a 2001 PlayStation 2 adventure game featuring a horned kid making his way through dangerous puzzles while leading an odd white-colored girl around by literally having to hold her hand and drag her around. The game was a landmark for the gaming industry, putting similarly named game developer Team ICO on the map, making way for their success with the PlayStation 2’s Shadow of the Colossus.

WYSIWYG stands for “what you see is what you get” and is commonly applied to visual editors. For example, if you’re building a webpage by dragging pictures around the editor, rather than dealing with HTML tags, you’re working in a WYSIWYG editor.

In Arabian mythology, Bahamut is a humongous fish that supports the Earth, but in our culture he’s most commonly known as the dragon summon throughout the Final Fantasy universe. He usually sports a non-elemental magic damage attack and is generally one of the strongest summons in each game.

A veritable king within our culture, J. R. R. Tolkien created The Lord of the Rings, essentially a template for modern day works of high fantasy, whether that’s a good thing or not.

The AT-AT, otherwise known as those big robot camels from Star Wars, stands for All Terrain Armored Transport and is apparently impossible to outrun, though judging by the way they move in the movies coupled with the fact that they opted for humongous mechanic legs instead of wheels, it’s probably safe to say you can briskly out-walk the mechanical camel death machines.

A popular open source Linux desktop operating system or philosophical concept regarding people’s relations to one another, most people within our culture are more aware of the former.

A two-fer! Mana is a widely-used term to describe a generally exhaustive pool of magic points in games that require a way to limit the use of magic. Mako is what amounts to mana in the immensely popular Final Fantasy VII, and is described as the liquid form of the Planet’s Lifesteam.

Within our geeky culture, shamans are usually recognized as users of spiritual magic; in video games, they tend to focus on healing and curses.

MySQL is a widely-popular open source database management system that allows multi-user access. It uses a relational database system that stores data in separate areas rather than lumping it all into one big space. The name is a combination of the creator’s daughter’s name and an acronym standing for “Structured Query Language.”

Created in 1971, Ra’s al Ghul is one of Batman’s biggest foes, though Ra’s al Ghul oftentimes considers Batman to be a potential ally. The character’s ultimate goal is to achieve a world that has perfect environmental balance, though that means exterminating most of the human populace, causing the character to suffer from the now-overused theme of “bad guy with a good cause tries to achieve it in a bad way.” Pronounced in a variety of ways between the Batman Begins movie and the various animated series (with Batman Beyond even making fun of the pronunciation by having Terry McGuiness mispronounce the name to annoy another character), any name sporting an apostrophe right in the middle easily lends itself to mispronunciation.

Like with the shaman, in our subculture, a magus is widely acknowledged to be a user of magic; though unlike the shaman’s focus on spiritual magic, the magus is usually seen as practicing more generalized magic.

Created in 1988, IRC, standing for Internet Relay Chat, is a type of Internet chat that was mainly designed for users to chat through the use of channels, though it does offer private messaging and file transfers. IRC is still going strong today, and there have been a multitude of IRC clients released that offer differing features catering to various user preferences.

An English author, Neil Gaiman is probably best known for his comic series The Sandman, his novella Coraline, and his collaborative effort with Terry Pratchett on the novel Good Omens.

A former programmer, Jonathan Coulton is now a singer-songwriter and is one of modern day’s famous geeks. His songs, which made him Internet famous, are focused on geek-related themes, such as a mad scientist who falls in love with one of his captives. His most famous song, “Still Alive,” played at the end of gaming phenomenon Portal, then eventually made it to the Rock Band library as a free download. Pretty much the modern day writer for geek anthems, he’s so Internet famous that a geek cruise will be held in his honor, featuring various other geek culture icons.

Ah, the best for last. More mischievous than outright evil and from the 5th dimension, Mister Mxyzptlk’s hobby seems to be bugging Superman. Not only does his name look utterly unpronounceable, but the usual way to defeat him is to get him to say or spell his name backwards, which will banish him back to the 5th dimension–an actual method of victory based on pronunciation.

Well, there you have it. Now when you pronounce anything on the above list incorrectly, it’ll be a defiant act of rebellion, rather than because you simply didn’t know how.