Gates Foundation Reinvents Toilets for the Future | The Mary Sue 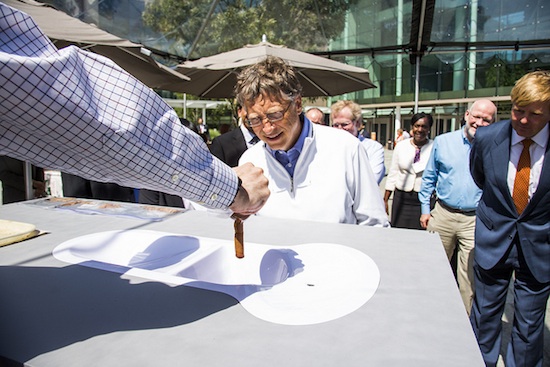 As we’ve reported here earlier, Bill Gates has deemed it time for a new toilet. For the last couple days, teams of engineers and designers from around the world arrived in Seattle to show off their best designs for the honey bucket of the future, competing against one another to see how they handled solid waste. Don’t worry, you guys, it’s all soy-based gunk — it’s just supposed to look a lot like poop, a goal at which it succeeds admirably. Participants in the Reinvent the Toilet Challenge, needed to meet several criteria set by the Bill & Melinda Gates Foundation, which is throwing its philanthropic weight (read: millions of dollars of cash money grants) behind the project in the hopes of creating a functioning off-the-grid sanitation system for the developing world.

The perfect future toilet needs to operate without electric power or running water, and it can’t cost more than five cents a day to run it. Bonus points if it can capture energy or recycle waste into something useful in the process. Potty humor aside, this is actually a pretty noble endeavor that has the potential to save a lot of lives. Millions of people worldwide die every year from mostly preventable diseases due to not having adequate means of sanitation or waste disposal. Potty humor not aside, here are some really interesting new toilet designs that we feel you should be made aware of.

(via BBC News, images courtesy of The Gates Foundation)