Review: Fanbase Press’ Gamma Gals Prove That Geek Girls Are Not to Be Messed With 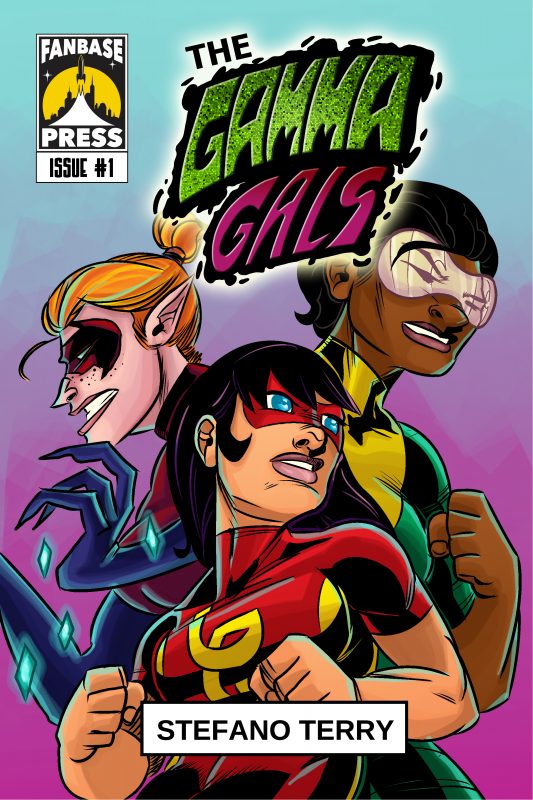 I am all about better representation in comics. More female characters. More ethnicities and races represented. More body types and abilities. Yes, please! In that regard, Fanbase Press’ newest title, The Gamma Gals, absolutely delivers. Unfortunately, where it’s less successful is its storytelling.

The Gamma Gals is a 4-issue digital comic series that features three RPG-loving teenage girls who awaken from a gamma-irradiated storm to discover they have extraordinary superpowers. Created, written, and illustrated by newcomer Stefano Terry, The Gamma Gals features a diverse cast of characters that aims to show all readers that everyone can be a superhero.

Issue 1 finds the girls — Harriet, Kira, and Sue — already with superpowers and fighting crime/protecting their city. As a superhero team, they’re dealing with a guy who’s wreaking havoc with powers he can’t control. As a group of high school friends, they’re dealing with bullying from a popular jock named Brenton Wilks, who seems to hate them just for existing. It’s hard to be a teenage girl, even with superpowers.

It’s a long-standing tradition to use superpowers as a metaphor for puberty, and a superhero life as a metaphor for the difficulties of high school life. Spider-Man, the Young Avengers, the Runaways, and even non-comic stories like Buffy the Vampire Slayer have all done this, and used those tropes to great effect. Those tropes are clearly evident here, and what makes them unique is that they’re being explored by a diverse, all-female superhero team, which is great to see. And yet this depiction of diversity is far from perfect.

Harriet is white, and in a wheelchair after a hit-and-run she experienced in childhood. Thanks to her newly-acquired superpowers, she has the ability to channel her energy into moving her limbs. However, this isn’t a Band-Aid to erase her disability. This power is limited, and severely drains her the longer she uses it at one time.

Kira is black, fiercely loyal, and the strongest of the three girls. Sadly, of the three, she’s the most stereotypical, playing into the invincible “Strong Black Woman” thing pretty hard and constantly wanting to punch stuff. What’s interesting, too, is that throughout the first issue, I assumed she was the leader of the group, likening her to Garnet from Steven Universe in my head. It wasn’t until I got to the final page, which contains stats and a character breakdown for all three girls, that I saw that Harriet is the leader. Really? Because she didn’t seem like the leader the entire time.

And then there’s Sue Kwan, who seems to exist to cover the Latina and the Asian bases (I guess having four girls would’ve been too much?). She’s supposed to be made fun of for her weight, but the way she’s drawn, you’d never know it, as she doesn’t look significantly different from her friends. She certainly doesn’t look different enough to warrant the cruel nickname “Chubbs,” and we only ever seem to see that she has any kind of fat on her when she’s looking in the mirror obsessing over her weight and Terry draws in a pot belly that’s not really there at any other time. It would’ve been refreshing if this character were actually drawn like a fat girl.

As for the pacing, storytelling, and dialogue, while the broad strokes of the story are there — a strong friendship among the protagonists, an intriguing burgeoning villain, etc. — the execution isn’t great. While I know that this is going to be a 3-issue limited series, we just kind of jump in with these girls without really getting to know them. There’s no origin, we’re just told in the beginning that there was a storm and they have powers now, so we don’t really get a sense of who they were before their powers, and what their powers mean to them now. Perhaps there’ll be flashbacks in subsequent issues, but as of this first issue I don’t feel particularly attached to any of these girls.

The dialogue is also a bit cliche and stilted, with 16-year-old girls saying things like “What in the devil?!” Also, as a woman who used to be a bullied fat girl nerd, I rarely got bullied that hard by guys. Sure guys made fun of my weight in high school in passing, but there were no Brenton Wilkses actively gunning for me. Guys mostly ignored me (which was its own special thing). Active bullying came from other girls who seemed to make a sport of finding new and improved ways to chip away at my self-esteem. I understand the impulse to create an important male character. However, in addition to needing more female heroes, we also need more female villains. We don’t just need female characters. We need female characters that are complex and nuanced.

I think that would be my overall note on this title. I appreciate the effort being made here, and I love that a male creator of color has created an all-female team that is diverse. However, and this is very possibly because Terry is a newcomer to comics, this is very much a paint-by-numbers, check off all the diversity boxes approach. The next step would be for Terry to spend a bit more time on character development so that these girls don’t remain mere stand-ins for qualities and ideas.

The Gamma Gals is out today, and can be purchased digitally over at Comixology, and a print edition can be pre-ordered at the Fanbase Press website. My hope is that the rest of the story makes up for the shaky first issue. In any case, I think support for this book is warranted, if only because Fanbase Press is an independent publisher that is making inclusion a priority, with titles like this and the much stronger Quince, which I’ve reviewed previously. They can’t all be perfection, but the point is to keep creating them. The more of them there are, the less we have to rely on any one “diverse” title or character to be perfect.