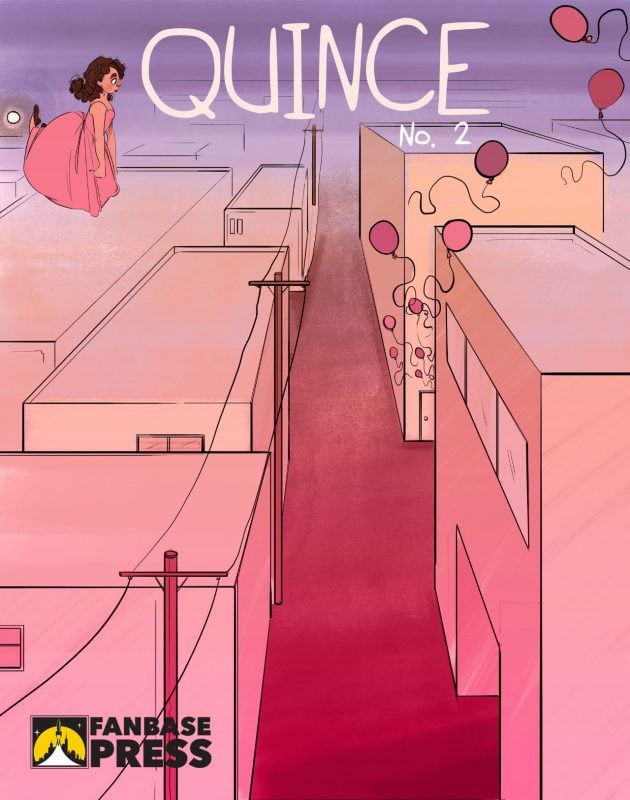 Growing up Puerto Rican in NYC, I had a Sweet 16, not a quinceañera. However, I was in one. Yes, in one, as in bridesmaid-style, because quinceañeras are huge affairs that rival weddings. I had to get a poofy dress and learn a waltz for a group dance and everything. They’re exciting, and also enough to drive the girl whose special day it is not just a little bit crazy. For Lupe, the protagonist of the Fanbase Press series Quince, they’re also enough to grant a girl superpowers!

Quince, the second issue of which dropped today at Comixology, is a 15-part limited series (which releases a new issue on the 15th of every month!), created by Sebastian Kadlecik (Penguins vs. Possums), who dedicates the series to “Shirley, Sarita, Olivia, Max, y toda mi familia.” I wonder which of those ladies had the quince that gave her superpowers!

However, rather than write the series himself, since Quince deals with a uniquely feminine experience, he sought out a talented female team to actually write and draw the book. Sister duo Kit Steinkellner (writer – Z: The Beginning of Everything) and Emma Steinkellner (artist – Pow Slam Sparkle) work together beautifully to bring this young Latina’s story to life.

Quince tells the story of Lupe, a 15-year-old girl who discovers that her quinceañera brings with it a super cool party . . . and superpowers. Her quince powers only last as long as she’s fifteen, so over the course of this roller coaster year, we follow the adventures of Lupe as she figures out what it really means to be a hero.

In the first issue, you get to know Lupe and her loving, if sometimes embarrassing and annoying family: her parents, older brother Carlos, younger sister Sophia, and her abuelita Emma, whom she loves more than anything. Lupe herself is sweet, geeky, snarky, and hilarious, her sense of humor permeating everything she does. As a point of reference, I think she and Jonesy over at BOOM! Studios would be high school Latina POWER BESTIES. [OMG – crossover?! Would that even be possible?! THAT WOULD BE AMAZING.] 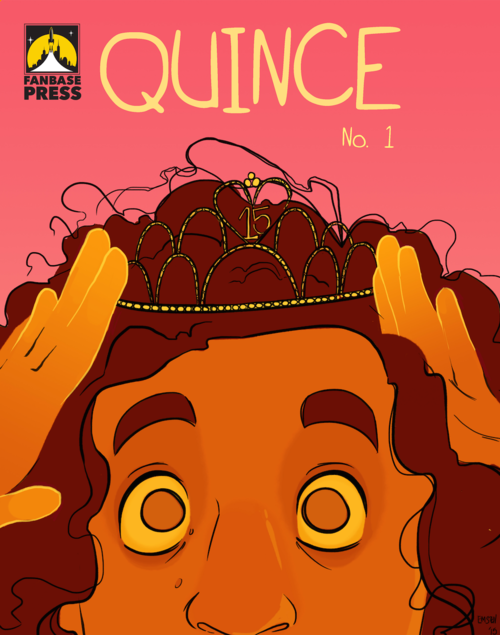 The story begins with Lupe getting ready for her quinceañera, including trying on the gorgeous dress her grandmother made for her. As she tries the dress on, Emma tells her that “with a great quince dress comes great responsibility,” to which Lupe replies, “Thanks, Uncle Ben.” But then Emma elaborates, saying that her own quince changed her life quite a bit, though she doesn’t really elaborate on how.

Which is why Lupe is surprised when, on the big night, as she’s freaking out with nerves in the bathroom before making her big quinceañera entrance, her hands start glowing yellow, and suddenly there’s an explosion…and she’s blown up the bathroom.

Issue #2 picks up where that leaves off, and the reader gets to see how Lupe’s party turned out, and just how she needs to handle that whole bathroom situation.

Quince is a wholly enjoyable, funny, big-hearted series that can serve as an amazing palate cleanser for the world we live in. Lupe is a heroine that is kind and smart to whom any teen girl (or anyone who used to be a teen girl) can relate. The supporting characters are also wonderful, and Emma joins a long line of awesome grandmas in fiction that will either remind you how awesome your grandmother was, or make you wish you had an abuelita like her.

Kit Steinkellner’s storytelling is lovely, and her characters pop off the page. However, as this is primarily a digital comic, it’s very much paced for the web, so things happen and are revealed a bit more slowly in 8 pages than they might be in a 21-page print issue. Still, the bite-sized nuggets will leave you wanting more.

I really want to shout out Emma Steinkellner’s art and use of color! First, I love the way she’s drawn Lupe, with a pear shaped body type that you don’t often see in comics. You also see a variety of body types, both at Lupe’s school, and at home, all of which feel very real. Her lines are soft and round, which is perfect for such a feminine story, and she’s great at using color to set the mood of a scene.

Kadlecik and the Steinkellner Sisters have created a warm and inviting book for anyone who wants a superhero story that’s a little out of the ordinary. Even better? Each issue is available in both an English and a Spanish edition, thanks to translator, Valeria Tranier. The completed story will be available in a print trade paperback in October, but why wait until then? At only $0.99 an issue, why not enjoy this little slice of happiness as the issues come out (and practice your Spanish while you’re at it)?

Issues #1 and #2 of Quince are out NOW at Comixology.