HBO Execs Talk Game of Thrones (Not) Catching Up With the Books, Whether There’ll Be a Movie 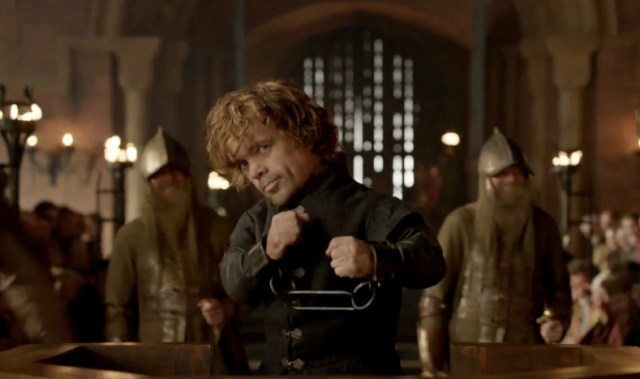 At no point during the Television Critics Association Summer Press Tour did any HBO execs mention the possibility of George R.R. Martin dying, which means the man himself didn’t swing down from the ceiling wearing a harness and shouting “F*** YOOOOOOOOU” through a megaphone. I kind of wish they had. That would have been awesome.

What Chairman/CEO Richard Plepler and President of Programming Michael Lombardo did talk about, however, is whether Game of Thrones will catch up to Martin’s books. Lombardo’s answer was basically “Uh… everything’s perfectly all right now. We’re fine. We’re all fine here now, thank you. How are you?”

Or, to be more exact: “We’re not off on our own in respect to at least next season. Obviously George is an integral part of the creative team, so next season every move is being choreographed very closely with him. Certainly after next year we’ll have to figure it out with George. The book’s not finished at this point, but we’re in conversations with him. We’re not concerned about it.”

That seems evasive to me. Thanks to dragged-out season four storylines for certain characters, pretty much everyone—even, if you really stretch it, —has enough to get them through however many season five episodes they’re going to be in. It’s the seasons after that where things could get weird, even if—as we know—Martin told showrunners D.B. Weiss and Dan Benioff the basics of what will go down in the remaining books (however many there are). But hey, let’s all just sit back and go along for the ride. There’s nothing else we can do. It’s not like Lombardo’s going to say what a lot of people assume he’s thinking—”AAAAAAHHHH, we’re catching up to George, what will we doooooo?!”

Regardless, they’re going to finish the story: “Our line to George has always been, ‘You keep writing and we’ll keep making the show’,” says Plepler. Lombardo added that HBO, as well as Weiss and Benioff, are “committed to” making it to the end.

Plepler and Lombardo also shot down those rumors about a movie, fueled by a statement Martin made. Lombardo says that there have been “no conversations going on” about a film, and Plepler added that Martin “is 100 percent focused on his books and his series, and has only held out the movie concept as something way down the road.”

So we’re not going to get that animated kid’s movie where Stannis, Davos, and Melisandre travel around modern-day New York solving crimes, burning heathens, and learning the true value of friendship? Screw this. Screw everything.