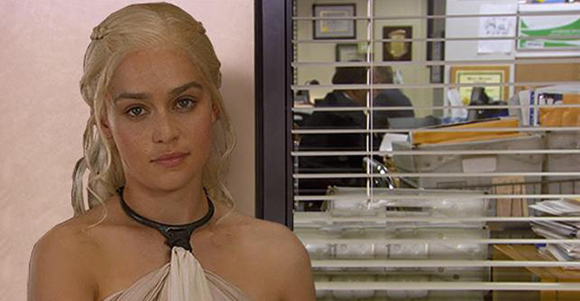 Of course he might. Gotta say, the Game of Thrones fandom is the only one where this news would be met by “Oh for f*ck’s sake” rather than “Yaaaaay, more books!”

Also in this post: Sophie Turner defending Sansa Stark to the haters and Emilia Clarke explaining Daenerys’ emotions in her big “The Mountain and the Viper” scene.

The news that book seven in A Song of Ice and Fire might not be its last comes from its editor, Anne Groell, who said in a fan Q&A that no one’s ever been quite sure how many books would be in the series. Originally it was going to be three, then four, then five. Eventually it became seven books for the seven kingdoms of Westeros, which is what Martin’s under contract for. “Only, as I recently learned while editing The World of Ice and Fire,” says Groell, “…there are really technically eight kingdoms, all having to do with who has annexed what when Aegon the Conqueror landed in Westeros. So, maybe eight books for Seven Kingdoms would be okay.”

”In all honesty only George knows how many books there will be in the series and he’s not saying: indeed at this stage of the writing, with the many branching pathways of the characters’ stories still to intersect, he may not know. As an editor I can say that it feels as if there’s a lot to tie up in just two more novels – albeit very long novels – but if George continues to kill off characters in his usual ruthless fashion it could easily be over in the planned seven books!”

But what does Martin have to say about all this? Here’s the official word from the man himself, via Entertainment Weekly:

“My plan is to finish in seven. But my original plan was to finish in three. I write the stories and they grow. I deal with certain things and sometimes I find myself not at the end of a story. My plan right now is still seven. But first I have to finish Book Six. Get back to me when I’m half-way through Book Seven and then maybe I’ll tell you something more meaningful.”

It’s good to hear that he’s not constricting himself creatively—some authors that works for, and George isn’t one of them, in my opinion. Those books need to be huge. And of course, Martin’s obligated to no one but himself in terms of what he writes and by when. But, speaking as a fan: Damn, I’m going to be 70 years old by the time I finally get to read what happens to everyone, aren’t I? And Martin will be kept alive, Face of Bo-style, by alien tech.

One of the characters whose fates I’m most interested in is that of Sansa Stark, because she’s going to grow up to be a major player and cut a swath of polite destruction through Westeros, mark my words. If there’s one person who doesn’t like the hate Sansa Stark gets–for being naive, for being “stupid,” for not being “badass” enough—it’s actress Sophie Turner, who defended her character to TV Guide:

“People don’t like Sansa because she is feminine. It annoys me that people only like the feminine characters when they act like male characters. And they always go on about feminism. Like, you’re rooting for the people who look like boys, who act like boys, who fight like boys. Root for the girls who wear dresses and are intellectually very strong.”

If Sansa “had acted out in King’s Landing she would be dead right now. But she didn’t,” continues Turner:

“She didn’t rebel when Joffrey cut her father’s head off. She tried to and then realized it was probably the wrong thing to do. And so she’s kept her mouth shut, and now look: She’s out of King’s Landing… That’s why she’s one of the most intelligent characters on the show, I think. She adapts so well and she has this thing where she’s probably the greatest actor out of all of them. She deceives with the façade of her former self and that’s what’s great. She never breaks face of this innocent naïve girl, and she’s not that… That’s why people should fear Sansa more than Arya I think, because no one knows what Sansa’s thinking… People don’t know that she wants to go around killing everyone. She would love to be Arya for a day just killing everyone, but she can’t because she knows that would just get her killed quicker.”

Anyone who hasn’t seen “The Mountain and the Viper” yet, scroll not past the column of Catelyn Stark sideeyeing the crap out of everyone in her path. Spoilers are below. 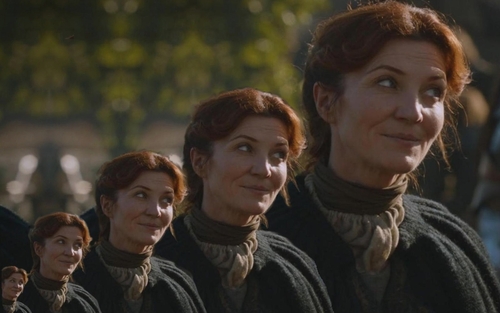 Speaking of characters wanting one thing and doing another: Dany in Sunday’s Game of Thrones, where she banished Jorah Mormont after learning he used to spy on her. “Emotionally for me it was so intricate,” says Emilia Clarke. “Jorah’s been with me since day one, season one. The scene itself is unpleasant because I — Emilia — know that what Dany is doing is wrong. And it was the first time I’ve ever felt that.”

To be honest, I didn’t get the sense in that scene that Daenerys was absolutely aware of how she was playing right into Tywin Lannister’s meddling hands, which is presumably what Clarke’s referring to with “know[ing] that what Dany is doing is wrong.” It wouldn’t be the first time she didn’t think through the practical consequences of her decisions—see the crucifixion of the masters and what would have been its impact on Yunkai, had Jorah not convinced her to show mercy. But hey. That’s just me.

Previously in actresses on the “strong female character”