GAME OF THRONES RECAP: THE WATCHERS ON THE WALL | The Mary Sue

Game of Thrones Recap: “The Watchers On the Wall” 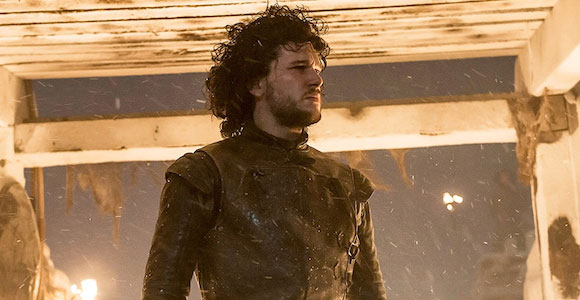 Last week’s Game of Thrones showcased the epic showdown of The Mountain That Rides Vs. The Red Viper of Dorne. We’re still reeling from that one, but now it’s time to look North and see what faces “The Watchers On The Wall.” Cannibals, mammoths and giants–Oh my!
Note: Please keep your comments to this recap free of book spoilers. Those comments are welcome on our spoiler-friendly post here.

It’s been a relatively lackluster season for Jon Snow. After he fled from the Wildlings in season three, Snow threw himself on the mercies of his superiors at Castle Black and begged forgiveness while trying in vain to warn them of the coming armies of Mance Rayder. Aside from a brief (but satisfying) conquest to topple Craster’s Keep, most of Jon’s arc this season has been essentially about bureaucracy, and how those in power don’t necessarily know their ass from a hole in the ground. Or in this case, they don’t know a serious threat from children’s scary stories. Basically, Ygritte’s not the only one who believes Jon Snow knows nothing. But in “The Watchers On The Wall” Jon’s predictions of war came true. And there was much blood and carnage.

Directing last night’s episode was Neil Marshall, best known for helming the action-laced horror movies Dog Soldiers and The Descent. But most of value for Game of Thrones fans, he was the helmer of season two’s penultimate episode “Blackwater,” basically the one all other climactic episodes will be compared to. Unfortunately, Castle Black is not as well stocked with characters we love or love to hate as The Red Keep was, so the action in “Watchers on the Wall” wasn’t emotionally rich or compelling as that widely adored ep. Yes, there were some casualties of characters we’ve gotten to know over three seasons, but you can’t compare our affections for Pip, Grenn and Alliser Thorne to our love or hate of Cersei, Sansa, Tyrion, Joffrey, and The Hound. All the same, this was a pretty intense show.

It begins with Jon and Sam on the wall, confronting what appears to be their inevitable deaths in very different ways. Jon seems to be mentally preparing himself for the war ahead, while Sam wants to imagine what it would have been liked to be loved. Jon has never been much for words, so when he describes Ygritte as having red hair, Sam quips “How big were her feet?” It’s a snarky rejoinder that not only shows the stress of this situation, but also how Sam has matured. He’s no longer a cowering mouse of a man, but a brother of the watch who can call someone on their shit.

Sam loves Gilly, but has no hope she feels the same. It’s a poignant moment, but the line itself sent my mind on a brief tangent, wondering if Horn Hill has a confused concept of the male version of this sex suspicion, like big feet are an indicator of a great lay. Nonetheless, Jon can’t handle any of this, because the possibility of seeing Ygritte again–and possibly having to kill her–is all too real. So, his responses are fumbled and far from poetic, and feels like the stuff of awkward coming-of-age narratives, which is summed up nicely in this clever tweet:

And romance! Not so far away Ygritte is thinking of him too! More specifically, she is thinking of putting one of her freshly sharpened arrows throw his stupid know-nothing heart. But can she do it? Well, not can she. She can. Ygritte is unmatched when it comes to accuracy with her bow, a skill that has her dogged by the others because Jon walked away from their last confrontation. But will she be able to put an end to the noble yet clueless pretty boy from south of the wall? While this is a massive battle which included CGI giants, wooly mammoths, towering cannibals, and a friggin’ anchor ripping through The Wall and across a swath of Wildlings, changing them into mere smudges of blood and gore, this confrontation is the one we’ve been waiting for. And for all of Game of Thrones subversion of genre tropes, it played pretty much as you’d expect.

Let’s leap ahead to the end for Jon and Ygritte. After expertly singling out one Crow after another (including poor petrified Pip) for slaughter, Ygritte spots Jon. It’s impossible not to. Once he comes down from the wall, he cuts a swath of blood and win. Most impressively, he takes on the insanely tall Thenn named Styr, a man so big he makes Jon Snow seem like a child by comparison. Ygritte doesn’t spy them at first. Despite all the arrows she’s sharpened, she’s run out. She deftly tumbles off her roof perch to salvage more. But her first targets from the ground aren’t shown. It’s on her third arrow that we see her see them. 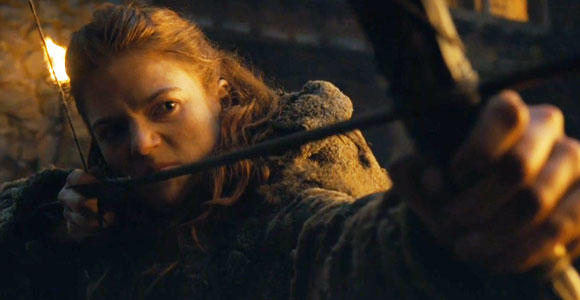 While she’s expertly picked off a bunch of Crows already, she doesn’t loose her arrow to save the Thenn. Though for a minute, it seems there’s no need as he smashes Jon’s face into and anvil and hurls him through a fire pit. But Jon Snow for all his thick-headedness is scrappy, and a well-placed hammer kills the massive man-eating Thenn. That’s when the stars align and our one-time lovers reunite with only Ygritte’s bow and arrow between them. She readies it, and instead of letting go with the lightning speed she’s shown not only all episode, but all season, she holds and glares. If only looks could kill, Ygritte may have lived. But Jon smiles at her, something so rare I struggle to remember ever seeing it before. And her look softens every so slightly. Then. Oof and splish! An arrow rips through her chest, courtesy of little Olly, fitting really when you remember it was Ygritte who murdered the boy’s father in “Breaker of Chains.”

We knew their love was doomed from when she first pushed her ass against him on their snowy mountain cuddle for warmth. But I’m annoyed it was a tertiary character who brought her down. As he wields a sword and she a bow, a battle between Ygritte and Jon would have been awkward. At least it could have been Sam or even Ghost. Either would have made for better drama. But nope. Little nodding Olly.

Anyhow, Jon rushes to her. He looks decades older as grief ravages his face. Her voice weak and soft as the life drains out of her, she asks if he remembers the cave. We all remember the cave, where virgin Snow proved to be a quick-to-learn lover. “I should have stayed in that cave,” she laments. Jon cries, and we think we’ve heard Ygritte’s final tragic words. But then he promises to take her back there, and she scraps together her last once of strength to give one last “You know nothing Jon Snow.”

While they are many deaths on this show you can’t see coming, Ygritte’s has long seem guaranteed. Still, we’ll miss her.

Let’s move on to some happier developments. Though the Crows were wildly outnumbered, attacked on two fronts, and manned by a batch of outcasts and cowards, Castle Black did not fall! Gilly and little Sam are alive and tucked away in the pantry! And Samwell Tarly, despite making the kind of promises which would certainly have gotten him killed in a war movie (“I promise I won’t die!“) made it through this bloody battle.

As frustrating and flat as the Sam/Gilly arc has been, it actually took on some interesting shape last night. I think partially because of how Sam has evolved as a character, from a coward to a man willing to sacrifice himself for a woman and child who aren’t even his. But also, Gilly actively wants something instead of just surviving, so it’s easier to get pulled into her emotional journey here. When she fled her father-husband’s keep, all she wanted was for her baby to live. She had no thoughts of romance with Sam or no real wants of her own. But in the scene where Sam hides her, we at last see her trying to claim something– Sam–for herself. It’s not exactly romantic, but it is sweet. And cheers to Gilly for somehow getting past the wicked Wildlings, scuttling along a ledge where she was clearly visible.

Ultimately, the episode ends on a “what was the point” note. Sure, the Night’s Watch stopped this attempt to breach the Wall, but as Sam points out they can attack again tonight, when the Watch is still tired, and now with even less fighters. So Jon Snow sets off to confront Mance Rayder himself–and he does it unarmed. He has little hope, but what’s the alternative? We’ve seen throughout the season the mayhem and murder the Wildlings will bring to the North with even a small crew. So if Mance breaches the wall, the death toll would be enormous. However, am I alone in struggling to care about the North? With the Starks toppled, it’s being run by the heinous Boltons. We have no personal stake in this sprawling territory anymore as all the characters we loved who lived there are dead or far-flung. And besides, Mance and his army seem unstoppable, especially as the Night’s Watch becomes more feeble by the day. Isn’t this staving off the inevitable?

So, what does this leave us for next week and the final (sob!) episode of season four? Well, we’ve got Sansa in the Vale plotting with Littlefinger to murder little Lord Robin. Brienne and Podrick are still headed there, seeking Sansa. The Hound and Arya reached the Vale–but with Lysa dead what’s their plan? Theon/Reek and Ramsay Bolton are besties and enforcers in The North. Oberyn was crushed literally, and now Ellaria is metaphorically crushed. Tyrion is facing execution, while Cersei smirks and Twyin keeps his eye on Daenerys Targaryen. Dany is ruling in Meereen, but has cut loose first loyal subject Jorah, who has been cast to the winds. Bran and his crew–who we haven’t seen since Jon raided Craster’s Keep–are north of the Wall following the Warg’s vision. So director Alex Graves has a lot to answer to with next week’s “The Children.”